Dominic Lawson on Lord Hall's 'welching' on the deal 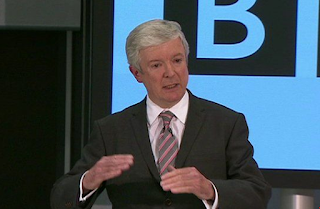 Dominic Lawson has a splendid piece in today's Sunday Times about the BBC's bad faith over the 2015 licence fee settlement.

That settlement saw Lord Hall & Co. agree to fund the licence-fee concession for over-75s whilst "in return" the corporation "got stuff it wanted": the licence fee to be adjusted in line with inflation for five years; the ability to charge the full licence fee to those who watched BBC programmes on devices other than a TV set; and a reduction in the BBC’s obligation to fund rural broadband.

But now Lord Hall has changed his mind, and "having pocketed the negotiating gains in the 2015 deal, the BBC is now proposing to welch on the big cost".

The piece ends with Dominic speculating that "the youth-fixated denizens of New Broadcasting House who blame the oldsters for the Brexit vote" might have another reason for ending the over-75s - namely as "a form of collective punishment."
Posted by Craig at 07:38