This, courtesy of DB, is very BBC: 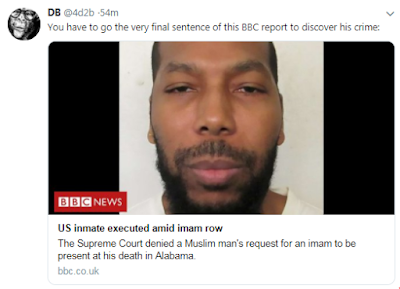 Yes, the poor "Muslim man's request for an imam to be present at his death in Alabama" is the story for the BBC - another tale of poor hard-done-by Muslims in Trump's America.

And, as DB says, you do indeed have to go to the very final sentence of the BBC report to discover his crime: "He was sentenced to death in 1999 for raping and murdering a 15-year-old girl in 1995."

Less agenda-driven media outlets would have mentioned that earlier.
Posted by Craig at 19:13