Ambassadors for the BBC 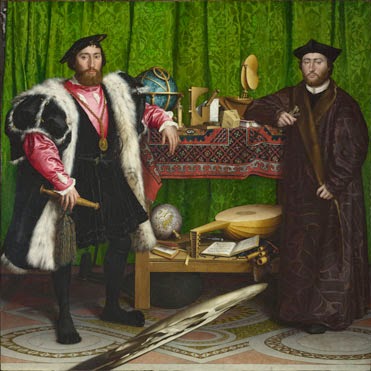 I've been struck by the extent of the praise - even on BBC-bashing blogs  (like this) - for the BBC's coverage of Holocaust Day [with the exception of The Big Questions], as well as for the commemorations marking the 50th anniversary of the death and funeral of Sir Winston Churchill.

As with its World War One anniversary coverage, the BBC does seemed to have regained some of its old lustre when it comes to doing major broadcasting projects. This seems to have happened within the past couple of years. (Tony Hall?) Whatever its other faults [the main subject of this blog included], if it keeps this standard up it could fully regain its old reputation as the 'gold standard' broadcaster for such things.

There does seem to be more ambition around at the BBC at the moment. (Tony Hall?) Their Wolf Hall adaptation has been garnering laurels of applause. I've not watched it myself (and my friends at work who did gave up, saying it was "boring"), but I have seen/heard some of the discussions about it and watched some of the programmes that the BBC appears to have produced to tie in with it - such as Waldemar Januszczak's characteristically enjoyable Holbein: Eye of the Tudors.

If you haven't seen that, I'd recommend that you watch it. [It's much more fun that listening to the latest Radio 4 documentary about hard-done-by Muslims in France].

Waldemar was clearly having none of the historical revisionism that has turned Sir Thomas More from a goody into a baddie and Thomas Cromwell from a baddie into a goody. Hans Holbein painted both, and Waldemar argued that his portraits of them told you all you needed to know about them. Cromwell's "piggy" eyes were those of a bad man. Waldemar will never forgive him for destroying vast swathes of English art (including Holbeins) during the iconoclasm of the Protestant reformation.

He also argued that Henry VIII wasn't just bad for the health of More, Cromwell and several of his wives. He was also bad for Holbein, whose art lost some of its subversive, daring genius during his years of painting for the king. I could see his point. The genius behind the early drawings based on Erasmus and the ever-fascinating The Ambassadors [actually one ambassador and a bishop] did become a propagandist, and maybe the Anne of Cleves portrait was a bit stiff. But what propaganda!

He also made the interesting point that our fascination with Henry and his wives may be largely down to Holbein. If we didn't have those mighty portraits of King Hal (looking mean, manly and magnificent) and his famous portraits of most of the queens, we wouldn't feel their presence anywhere near so strongly. Tellingly, possibly the most interesting queen of all - Catherine Parr - has impinged least on people's consciences. She was the one queen of Henry that we don't have a portrait of by Holbein.

Waldemar is a brilliant communicator. He used to do wonderful series for Channel 4 before moving over onto the BBC. [While he was at Channel 4, BBC One largely stuck with Rolf Harris as their artistic go-to man].

I did wonder, though, about his self-awareness. He stood in front over several portraits of Henry VIII and make several wisecracks about the king's considerable size - "the widest man in Christendom". Curiously, he himself was stood in the same pose and is now as "wide" as Henry. Was he conscious of the irony?

Another brilliant communicator who used to be largely confined to Channel 4 is David Starkey. He also seems to have made a move to the BBC, having presented another anniversary-related progamme (with Lucy Worsley) called Britain's Tudor Treasure: A Night at Hampton Court and, this week, having presented a wonderful documentary this piece about Magna Carta, called - in typical BBC fashion - David Starkey's Magna Carta.

[There was a period, some 15 years ago or so, when the BBC was having an affair with 'Whisperin'' Dan Cruickshank. They couldn't get enough of his breathy enthusiasm for architecture. Programme after programme, nearly all with titles featuring the name 'Dan Cruickshank'. So much so that I was hoping, in time, for one called Dan Cruickshank and the Dan Cruickshank of Dan Cruickshank].

David Starkey's Magna Carta was a splendid narrative history with a contemporary political point to make. It romped through some big moments in British history, having got Bad King John and the barons out of the way fairly swiftly, before briefly relocating to the U.S. to show Magna Carta's continuing global influence. Along the way we learned that King John almost certainly could read and that Oliver Cromwell didn't reckon much to the Great Charter, calling it "Magna Farta". [Funny, the facts you remember from a programme!]

While in the U.S. he made a brief but unhappy slip in saying that Magna Carta is still incorporated in the constitutions of many of the U.S.'s "52 states". Still, if Obama can do it, why not Starkers?

I also think that his libertarian political point was well made - namely that Magna Carta has been re-sidelined since 9/11, both in the U.S. and in the U.K. Security concerns, he argued, are increasingly being seen as more important than Magna Carta-born principles like 'no detention without trial'. He fears authoritarianism, and thinks it's already arriving here. He talked to a leading lawyer on behalf of the Gitmo prisoners and to Conservative MP David Davis.

Even if you don't agree with that (and I'm not entirely sure I do), it was expressed so cogently that it forced you to think - which is what you want from a programme. So, I'm recommending that too. 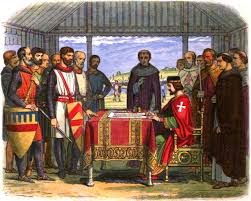 The BBC's Magna Carta coverage also included a superb series on Radio 4 by Melvyn Bragg. This was, as you'd expect from the man behind In Our Time, a considerably more detailed study, featuring lots of academics and experts. Like most episode of In Our Time it was absolutely fascinating - all two hours or so of it. It's still available, so - guess what? - I'm recommending that as well.

As I've said many times before, there's plenty to admire and like about the BBC's output. It even seems to me to be getting better in certain areas. Other areas (like BBC comedy) need working on. And as for the news output and the social/political bias embedded in so many areas of its general programming...

Well, yes, that's the primary point of this blog, I suppose - to damn the latter. It won't stop us praising the former though, whenever the mood takes us. It always seems a bit daft (or "miserabilist") not doing so.
Posted by Craig at 09:59