Tugging at the heartstrings

The BBC ends the year as it intends to continue. Above is a screen grab from the BBC News homepage (International edition). Surely this fails every test for neutrality? The ‘brave’ child with the Palestinian flag ‘confronts’ armed Israeli soldiers. Tugs at your heartstrings.
Some might call that child abuse but in reality the child was in no danger unless, of course, someone off camera decides to up the ante. I would call it blatant propaganda.
UN Security Council rejects Palestinian resolution Perhaps it is quibbling but this wasn’t a Palestinian resolution. It was a Jordanian resolution about forcing a Palestinian State yet to be formed.
The BBC is supposed to be British but look how far down before the abstain vote by the United Kingdom is mentioned. Surely that vote (non-vote?) was of interest to the audience whose license fee maintains the BBC?
The video which introduces the article is not much better. It starts with the funeral of a teenager without mentioning that he was engaged in an assault on Israeli troops when shot nor does it mention the Hamas/Fatah flags. Hamas BTW is against any resolution less than everything and specifically rejects and solution from international organisations. The message is clear Israel guns down children.
Inevitably the BBC the Jordanian ambassador gets a chance to state her full post facto case but Israel is voiceless.
Also inevitably the Israeli media quoted is the Guardian clone Haaretz who share of the Israeli newspaper market is less than 5%.


Tracking down the source of that heart-tugging photo, it shows "A Palestinian girls wav[ing] the Palestinian flag near Israeli soldiers during a protest over Israeli occupation and land confiscation in the West Bank village of Masarah, 19 December 2014. EPA/ABED AL HASHLAMOUN" [i.e. from the European Press Agency].

So it wasn't a photo from the day of the vote showing a protest in support of the Jordanian bid.

It looks very much, therefore, as deegee suggests, as if it's an image which someone at the BBC News website came upon at random, and doubtless picked because of its heart-tugging potential.

And talking of that sort of BBC reporter, I see that the BBC's Sydney correspondent Jon Donnison emerged from his period Christmas purdah with a series on tweets about...well, can you guess?.... 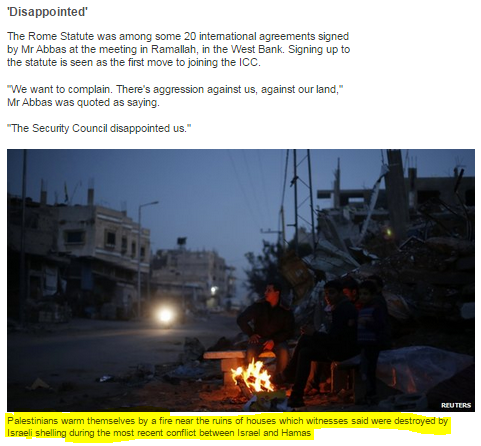 This has been around for at least three weeks, appearing on Ammon News back on 8 December. The BBC seems to have supplied the heart-tugging caption itself.
Posted by Craig at 12:14