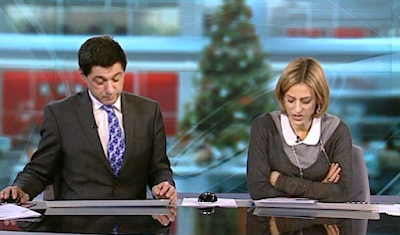 Jon Sopel and Emily Maitlis are starting their Americast podcast this week and Jon Sopel has been talking about it to The Radio Times. He says it will allow him to be even more sceptical and opinionated than he is on the News at Ten!:

Because it’s a half-hour conversation it will allow us to arch an eyebrow half an inch higher than maybe you would do on the 10pm news [Ed - Surely, if his eyebrow arches even higher it will disappear over the top of his head, down the back of his spine and end up in the seat of his trousers], or point out some absurdity or historical context…We don’t want to be bland and boring; there’s got to be a reason to listen, so hopefully it will have a sharp edge to it.

Will Jon and Emily be impartial?, asks the Radio Times. His reply?

I bet there will be times when we cause upset; give someone indigestion and heartburn in the higher ranks of the BBC. We’re right to be aware and careful, but if we are going to be so self-censoring that we’re not doing our jobs then we’ve gone the wrong side of the line.

In other words, it less be even less impartial than his and Emily's 'normal' reporting. What beauties!
Posted by Craig at 06:53