The case for Israel - 'the deal of the century'

I’ve been scouring the internet in search of material with sufficient credibility to counterbalance the BBC’s default hostility to Trump’s ‘deal of the century’.

If the BBC wasn’t so overtly negative about it I wouldn’t need to do that.

The trouble is that the political and academic left’s distortion of the facts surrounding the establishment of Israel has infected a generation of people - from cradle to grave, as the saying goes. I’m sorry to say that it reminds me of the advice given to the fella who asked the Irishman for directions. “If I were you I wouldn’t start from here.” The starting point - the default premise - is all wrong.

From well-meaning patriots who defend to the death Britain’s conduct (the counterpart of that blanket (but heartfelt) condemnation of all Zionists as “Israel firsters”), to the less well-meaning folk who claim somewhat resentfully that Britain went to war to “save the Jews”, the skewing of some of Britain’s less honourable history means we’re ‘in the wrong place at the wrong time’ and can’t properly evaluate Trump’s plan with the objectivity it deserves.

Rather than jumping to the - dare I say - superficial conclusion that much of the MSM has jumped to, which is that the plan swindles the Palestinians out of something while giving Israel everything, I sought out various opinions from better-informed voices than mine, and I conclude that the MSM has lost sight of the objective, namely bringing about a better outcome for the Palestinian people and a safer one for the Jews of Israel.

They have forgotten or have disregarded the fact that the Palestinians were never going to be happy. Their religiously-based stance is that the Middle East is and must always be ‘Islamic’.  The very existence of Israel is an abomination to them and they’ll cut off their noses to spite their faces till the rest of the Arab world is finally driven to the point of abandoning them altogether.

Two very disappointing articles in The Times by Catherine Philp make me regret subscribing to that particular newspaper. The only redeeming feature (of having a subscription) is that I get access to the online comments section, which to a certain extent redresses the balance.

(Apart from the odd gem, like today’s piece by Giles Coren, (£) which boils down to the realisation that no-one really gives a stuff about other person's opinions - be they ignorant or otherwise - because the only opinion we care about is our own, and that is despite the likelihood that our opinions are (consciously or unconsciously) simply the regurgitated opinions of others.  Several commenters have consequently noted the futility of even their own comments, and I hereby confess that my own observations are largely regurgitated; accordingly, I am fully aware of the futility of expressing them.)

So, if you’re still with me, on 28th January 2020 Catherine Philp wrote an opinion piece in The Times (£) titled: Temple Mount or Haram al-Sharif? Venerated in both religions.

In it she set out a potted résumé of “the axis around which the Israeli-Palestinian conflict revolves” Thankfully, she was taken to task below the line. For example, she chose the verb ‘seized’ to describe Israel’s defensive practices, while she used the passive verb  ‘held’ for Jordan’s aggressive takeover of East Jerusalem. The entirety of her piece was patently anti-Israel and pro-Palestinian and, but for the comments, one would have to despair.

“Typical Philp. Omits to mention it was the Arabs who started the wars in 1947-8 and 1967.
And that Jews and Christians welcome people of other faiths to their holy sites, it's only Muslims who ban them with violence and threats of violence.

“Jerusalem was just another site for Islam until the Israelis captured it in 1967. Suddenly for propaganda reasons it became important. Because in some fable Mohammed visited it on a flying donkey …”

“Actually, it was Transjordan that invaded and then occupied the so-called West Bank and East Jerusalem in 1948. It then annexed them, changed its name to Jordan and denied Jews any access to their holy sites in the Old City all without a single word of protest or condemnation from the UN, the UK or, indeed, any other country in the world. Israel captured and re-occupied the Old City after having been attacked by Jordan in 1967. The re-occupation of the East Jerusalem and the West Bank is therefore not, contrary to popular opinion, illegal in any way.”

and a couple more:

“During its long history, Jerusalem has been attacked 52 times, captured and recaptured 44 times, besieged 23 times, and destroyed twice. The oldest part of the city was settled in the 4th millennium BCE, making Jerusalem one of the oldest cities in the world.

“There are a number of important inaccuracies in this article. UN resolution 181 which in effect established the state of Israel decided the City of Jerusalem in which Jews lived and had lived for thousands of year would become an ‘international city ‘ cut off from the rest of Israel with one single means of access, that might well have been the situation today had 5 Arab armies not invaded the new state with the stated intent of driving the Jews into the sea. As a direct result of this war, the Jordanians obtained control of East Jerusalem, the old city of Jerusalem, forcibly driving out the Jews they did not kill, and vandalising 57 synagogues and religious institutions totally destroying 12 of them, some hundreds of years old. The Israelis were left in control of west Jerusalem. This state of affairs continued until the 6-day war in 1967 when Israel retained control of its Holy sites in the old city gradually rebuilding them and destroying no churches or Mosq


"Given that it was the holiest site for Jews for a couple of thousand years before Islam was even created, there shouldn't be any doubt over who has the greater claim.


So at least the readership is willing to fight back. Next, today’s effort.

Abu Dis: inside the ‘future capital of Palestine’  (£) 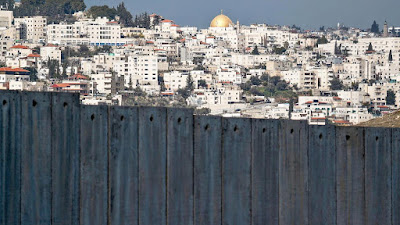 Again, Ms Philp has taken the same anti-Israel approach. (Biased, right down to the emotive illustration.) She believes that Trump is fobbing the Palestinians off with a dud. The suggested new Palestinian capital, Abu Dis, is “an impoverished urban ghetto on a hillside outside Jerusalem,” and no substitute for East Jerusalem, and does not meet Palestinian ‘demands’.

Once again the readership comes to the recuse:

“Reading this article one would never know that the reason Israel is in the West Bank is because it was attacked by Jordan in 1967 as part of the Arab plan to annihilate the country. Best forget that though, it doesn’t fit in with the general narrative.

“Year on year, for many years, any detail that favours Israel has carefully been brushed out of the historical record. Because no one concomitantly challenged this  exercise in manipulation, sheer lies now dominate.

“The villagers of Zubeidat settled there "in 1948" , and they came "under occupation in 1967 when Israel seized the West Bank, driving out the Jordanians."

Since they settled in an area which Jordan invaded in 1948, they must have lived under Jordanian occupation from 1948 until 1967, when Israel drove the Jordanians out. So why omit the word 'occupation' in relation to Jordan, and use it only in relation to Israel? It seems that even terminology is craftily deployed -- but only when Israel is in the frame.


“You fail to mention why the wall was erected. Palestinian terrorists came from East Jerusalem and were in the habit of putting bombs on busses, in bars and otherwise randomly attacking in what is and must remain one of the world's premier sites for tourism and prayer. Now the wall is up with airport type security these attacks have fallen dramatically. They are reaping what they sowed.

“It is not Palestinian Land. In 1945 it was in the British mandate as it had been within the Ottoman Empire. It had all been Israel so in 1947 it went to the UN who decided to create a new Israeli State by a two-thirds majority. The Arabs did not accept it and went to war. Following an armistice, Jordan and Egypt’s took control of the disputed areas until they again acted aggressively towards Israel who took control but relished control of Gaza which has a border with Egypt. The Arabs continued their terror against Jews which the Mufti of Jerusalem had started 100 years ago and which has never stopped.   Over 2m Arabs live  and vote in Israel.

Israel is prepared to allow self-autonomy in parts of Judea and Samaria.
Two-thirds of the Palestinian mandate was carved off by Churchill for the Palestinians but to live under Hashemites do that they have their state.

what injustice do you refer to? That Arabs continue as they have done for 100 years continue to murder women and children?

I see that Catherine Philp has responded to one comment. She must read the comments then. Her unsympathetic attitude to Israel reflects the MSM’s pretty accurately. It will be a long time before the tanker turns, but  I believe it will.

Melanie Phillips sets out the pro-Israel case with her customary eloquence.

The Palestinians' bluff has been called. Over to you, world https://t.co/IPU76NKJpv via @melanielatest
— Melanie Phillips (@MelanieLatest) January 31, 2020

The bottom line is:

“Now the Palestinians’ bluff has been called. Once again they are responding with threats of more violence because there are no circumstances in which they will ever accept the right of the Jews to their own ancestral homeland.”

“Along with Prime Minister Benjamin Netanyahu, all my friends are delighted with Donald Trump's plan to solve the Palestinian-Israeli conflict. I agree that, in contrast with prior presidential plans, this one has much to commend it; unlike the Carter, Reagan, Clinton, and George W. Bush proposals, it takes Israeli security concerns seriously. Most of all, it indicates an unprecedented and emotionally wonderful level of U.S. support for Israel.“ That said, I am not delighted with the plan”

David Collier sets out his verdict here.  He explains it well. As per tedious usual, this thoughtful piece has lured his most tiresome trolls who, unable to counter with a reasonable argument, resort to vitriol, venom and personal insult. I really don’t know why he puts up with them, but I suppose in a way it demonstrates the degree of idiocy we’re up against.

So bearing in mind that no-one other than me gives a stuff about my opinion, I offer you a selection of the opinions of others, albeit with a strong hint at mine. As if you didn’t already know. 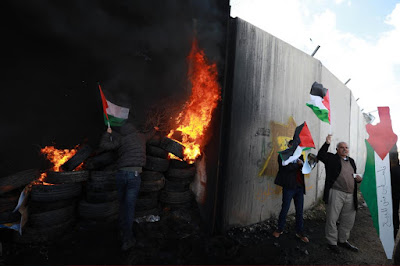 in contrast with the achievements of some of the Palestinians.
Posted by sue at 17:26