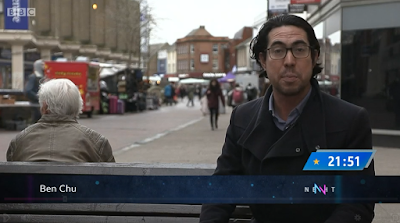 Never agree to be a vox pop on Newsnight.

Ben Chu, the programme's economics editor, went to Bedford. One of the people he spoke to was the sister of an Italian-born baker. She supports Brexit.

Go to 8m 16s and just listen to the way Ben adds an incredulous tone of voice to the word 'immigration' when he says, "And Salvatore's sister Liz has come round to supporting Brexit on the grounds of tighter immigration control."

However already set up Salvatore and Liz's immigrant background, was he signalling to viewers that it's a bit rich for Liz to want immigration control? Why couldn't he just have said that without modulating the pitch of his voice to express surprise at her holding this point of view?
Posted by Craig at 09:45