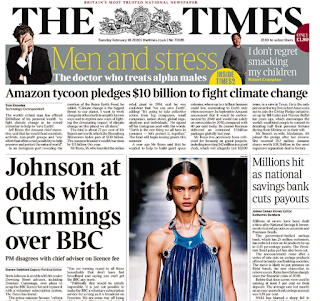 Don't open the champagne yet!

Andrew Neil sums up today's lead story in The Times as, "Hilarious! PM moves to protect BBC from his own government".

It's all about those "sources" again. There are two of them in this latest article. One says, “The PM is not as gung ho on the licence fee as Dom. With Dom it’s ideological — he believes the licence fee should be scrapped. With the PM it’s more reform than revolution,” while the other one says that Boris is personally “cool” on the idea of scrapping the licence fee.

Much less confusing is John Whittingdale telling The Critic: “There are large parts of the country that haven’t got broadband or indeed choose not to pay for it. You are turning round to all those households that don’t have fast broadband and saying, ‘You can’t get the BBC any more.’ Politically that would be utterly impossible. It is just not possible to make the BBC a voluntary subscription service for as long as it is broadcast on Freeview. We are some way off being able to switch off Freeview and put it all online.”

Meanwhile, the BBC and its allies, including The Guardian and plenty of celebrities, are on manoeuvres. From Labour to the Conservatives, the various posses of the corporation's political friends are also riding to its rescue, all guns blazing. As you've been noting in the comments, even its supposed political critics - Lord Adonis, Alastair Campbell & Co. - have given up their cynical pretence of being anti-BBC and are manning the barricades for 'the Brexit Broadcasting Corporation'. The war is far from over.
Posted by Craig at 05:37