Another day, another example of identity politics lunacy treated as 'a real thing' by the BBC: 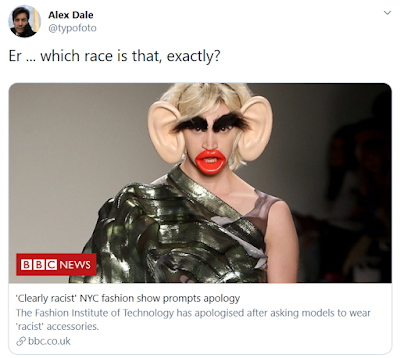 The tweeting public aren't convinced though. The helpful responses to Alex's question include: Potatoheads, Ferengi (from Star Trek), folk from Bolton, Linekers, Bert & Ernie from Sesame Street, blow-up dolls, Essex girls and a race of Prince Charles/Mick Jagger hybrids. I myself think the racism is directed against one of the most vulnerable minority groups in our society, the Oddbods from Carry on Screaming.