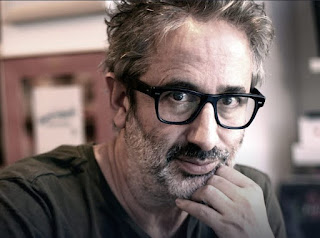 When I heard that David Baddiel was making this film for the BBC, I did wonder if a notoriously pro-Palestinian Broadcasting Corporation and a comedian could really make a credible job of such a delicate subject. After all, does Baddiel look much like an historian? (Does he even look much like a comedian?) And is the BBC an honest broker all of a sudden?

Alarm bells went off when I heard Baddiel was off to see a Professor from the SOAS. Whose idea was that? The SOAS’s reputation (as a wing of Islamophillic academia) didn’t auger well for the programme's prospects.

Achcar’s contribution interested me the most, and unsurprisingly, it interested the MSM the least.
Mick Hartley absolutely nails it.

“…..But, about half-way through, he started talking about places where Holocaust denial was strongest, and came up with Gaza and the West Bank - ie Palestine - with a figure of 82%. So he headed off to SOAS to meet a supposed authority on the subject, Professor Gilbert Achcar.
[…]
So what did Achcar have to say for himself here, to Baddiel? Basically, he argued that because the Palestinians live in such a state of miserable oppression under the Israelis, their Holocaust denial should be seen as a “provocative” means of hurting their enemy - a kind of "fuck you" to their oppressors. “I don’t think you can generally, without some degree of pathology, be a Holocaust denier in Europe. But you can be perfectly sane and be a Holocaust denier in the Middle East because of ignorance of the topic,” he said. In other words there's "bad Holocaust denial" - the Western kind - and "good Holocaust denial" - the Arab kind.

The subject wasn't pursued. Achcar's vile excuse for Palestinian Holocaust denial - understandable because of what the Jews are doing to them - was left unchallenged. Baddiel, to his credit, wasn't happy with that "good Holocaust denial" vs "bad Holocaust denial" distinction. But the episode still left a bad taste in what was otherwise an excellent programme.

You will have to read the whole thing and follow the links if you want to make sense of the following observations from me. (Forgive the proliferation of parentheses.)
Suffice it to say that just because an ideologically antisemitic individual like the good professor has been gracious enough to concede that the overwhelming documentary evidence of (the enormity of) the holocaust may have some validity, it doesn’t mean that this person is committed to impartiality where Jews are concerned. It doesn't guarantee consummate objectivity where personal prejudices might colour his judgement.
Therefore his attitude to the Israeli / Palestinian situation is likely to be as objective as a fox in a henhouse.

Me and David Baddiel, (an unlikely couple)  can’t be the only non-observant, secular Jews who have only come to appreciate the significance of our heritage comparatively late in life. The question of confronting our ‘identity’ hasn’t been urgently thrust upon us by the (current) rising tide of antisemitism or the (thankfully) transitory threat of a Corbyn regime. Not quite yet; and unfortunately, forbidding political atmospheres are just as likely to propagate a seasonal crop of  ‘AsaJews’ who align themselves with antisemites as a glut of secular Zionists like me.

My ‘Talmudic-like’ thoroughness (that’s a semi-insult I’ve had thrown at me) has compelled me to look at as many reviews of this programme as I can digest, and I have to say that Anthony Julius’s advice (“don’t go there”) was well worthy of consideration. Julius knew, of course, that it the MSM would automatically bestow the oxygen of publicity upon Holocaust-denying self-publicists like songsmith Dermot “Mulqueer”. Mul very queer indeed.

Predictably, that was the only part of the programme that ‘OMG The Daily Mail’ was interested in. Mind you, the musical interlude can’t have done the poor chap’s musical career much good, and it was heartening to see that the comments in the Mail were overwhelmingly negative about the Irishman and supportive of Baddiel.

The verdict? A curate’s egg. While Baddiel was thoughtful and sympathetic, it was unforgivable that he wasn’t able to challenge Professor Achcar on the most pertinent aspect of Holocaust denial, and the one with the most relevance to the rise in antisemitism. The selective blindness which pointedly (and necessarily) avoids acknowledging the driver behind it - Islamic antisemitism.

The highest Holocaust denial statistic (82%) was gathered from the Palestinian territories. Mahmoud Abbas’s so-called academic credentials are based on it. The BBC’s inability and unwillingness to address Islamic antisemitism is another manifestation of the same old missing link.  The unwillingness to confront something so basic makes its absence all the more glaringly conspicuous and its very absence propels it.