What is happening to the BBC? As of 2020, fewer people than ever trust the 'British' Broadcasting Corporation to tell the truth. Accusations of bias and fake news reverberate inside and outside of social media tarnishing the name of this once respected brand. Every minute of every day the BBC production line is hard at work. A finely-tuned machine, Britain's publicly-funded state broadcaster pumps out an enormous amount of content much of which attempts to mislead, unnerve and inflame the audience. Encompassing its coverage of Trump, Brexit, climate change, Syria and everything in between, there is nothing spontaneous about BBC propaganda. It is constructed to achieve specific goals. The Fake News Factory promises to blow the lid off what has become a radical, political agenda. Unable to modify its playbook by a single degree however, the corporation faces an existential crisis. More hated than loved, the BBC unravels in front of our eyes. Audiences deserting in record numbers just how does the BBC manage to retain its pre-eminent position within the UK media landscape? Using myriad examples of unethical practice in this sequel to his acclaimed BBC: Brainwashing Britain? David Sedgwick takes the reader on a disturbing journey into the very heart of dishonesty. 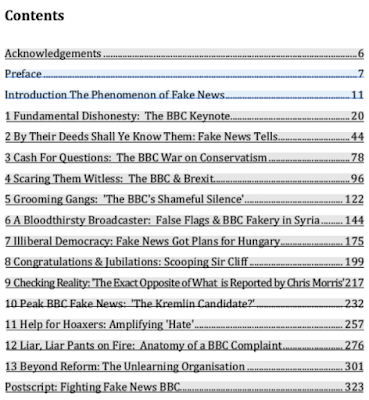