"The BBC hides, when it's under criticism, it hides." 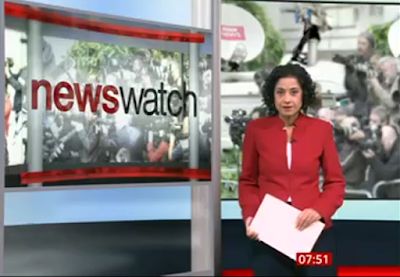 I did smile at this week's Newswatch (also discussed by John on the open thread). The programme played a clip of Lord Grade slamming BBC heads for "hiding" from criticism and then Samira Ahmed, in her most headmistress-like tone of disapproval, stated, "Well, we asked the BBC for an interview to explain the decision did not broadcast the statement. But they refused". Ouch!

Samira Ahmed: The main complaint about Friday's coverage of Brexit night was to do with the Prime Minister's statement and the BBC's decision not to broadcast the footage. Usually in these kind of situations, a national broadcaster, either the BBC, ITN, or Sky News, would be invited into Downing Street, to record the Prime Minister's words. Instead, the statement was recorded by Boris Johnson's team and distributed via Facebook and Twitter. The BBC decided not to broadcast it. Instead, using a graphic with a quote spoken by the presenter. Many viewers complained about this decision and so did the former chairman of the BBC, Lord Grade, who voiced his concerns on the Today programme on Thursday.
Lord Grade: I'm very critical of the BBC not defending decisions it makes editorially. The most recent one, not running the Prime Minister's Brexit speech. Fine, that's a decision the Director-General or the Head of News and Current Affairs should be up front, defending that decision. Or not, as the case may be. The BBC hides, when it's under criticism, it hides. And I'm very critical of the BBC for that. And that's completely wrong, because they expect everybody else to come on and be accountable to the BBC's journalists when they are enquiring.
Samira Ahmed: Well, we asked the BBC for an interview to explain the decision did not broadcast the statement. But they refused, instead, giving us this explanation.

And this was 'the explanation':

There is a process for recording statements by the Prime Minister, under which one broadcaster records it and shares the footage with other broadcasters. BBC News was given advance notice of the news-worthy aspect of the video message and reported that in our coverage throughout the day. In line with our usual editorial practise we did not run the video. It was available elsewhere, including on the Prime Minister's social media. 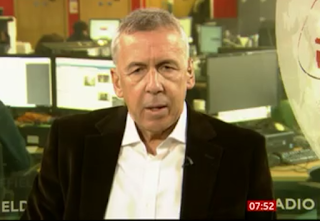 Someone who did come on was viewer Nigel Bonson, who did splendidly, giving excellent answers to Samira's questions. Good man!:

Samira: Well, I'm joined now by Nigel Bonson, who is one of the viewers who contacted us about this and he is in our Sheffield studio. Nigel, why were you unhappy with the BBC's decision not to broadcast the video?
Nigel: Well, I'd sat waiting for it, as many people would have done I'm sure. I waited for the interview to be broadcast and it just didn't happen. I didn't see any apology or any explanation until later. What you just mentioned about that explanation might involve internal politics between the normal process of the BBC and others going into Number Ten, but as far as the public's concerned, and as far as I was concerned, that just didn't matter. I don't think the public care how it's done, they wanted to hear the Prime Minister's address.
Samira: So, the BBC might say they did report what he said, including reporting in advance all day what he was going to say and that audiences did get informed on the news content.
Nigel: Well, I certainly wasn't informed. But as far as I'm concerned what they reported in short, snappy bits during the day is irrelevant. I, and I'm sure others, wanted to hear the Prime Minister at 10pm, as had been widely suggested we would do.
Samira: ITN didn't put the footage out either, which is interesting. And you'll be aware that Number Ten increasingly seem be using social media instead of speaking to national broadcasters, which is usual practice on recording a statement like this. I suppose the BBC and some viewers might feel that there is a potentially dangerous precedent. Do you have any concerns about that at all?
Nigel: No, I don't. What ITN chose to do isn't relevant I think. The BBC, as a national broadcaster, should broadcast these things. And, again, the average member of the public wouldn't be aware of how it's done. To be honest, I think it's rather petty and to do with internal politics, rather than meeting the needs of the nation.
Samira: Just to be clear, you'd feel the same, whoever was Prime Minister, if this was how they chose to release their statements?
Nigel: Absolutely, and that's central to my argument and I hope that's not being missed.
Samira: Journalists are definitely concerned that there is an attempt to control the press, to limit how his message is got across, which might, ultimately, I suppose broadcasters would say, be to the detriment of the public and public service to hold the government to account on behalf of voters. Do you think at any stage there might be a point of principle around the Prime Minister's use of social media as his main way of getting out his message?
Nigel: Well, I think social media, nowadays, is just as important as national TV. I would clearly be concerned, as I'm sure with others, if that was being managed too much. My view is that had the BBC got into Number Ten to record it, there wouldn't have been any questions and answers anyway, so it wouldn't have held the Prime Minister to account.
Samira: So if you had a message to give to BBC executives, given that they made this decision, what would you say they should do?
Nigel: I would say put the public and the viewers first and, as would normally happen, if the Prime Minister wants to address the nation, he should be able to. I would just draw the analogy of a general election after two months campaign, a decision that affects the next five years of the country, then that would have been covered. Yet this has been a four-year campaign and something that will affect the nation for perhaps generations and yet the Prime Minister wasn't heard on the night.