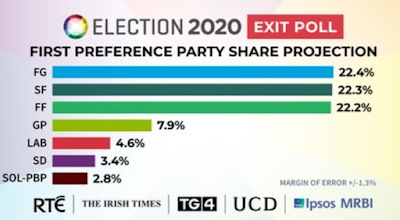 The three-way tie suggested by the exit poll in the Irish general election between the Family of Gaels, Ourselves Alone and the Soldiers of Destiny reminds the presenter of BBC Radio 4's Making History, historian Tom Holland, of my favourite film scene: the three-way shootout at the climax of The Good, The Bad and The Ugly. Having thought that, Tom then had another thought:

Obviously, if it DOES come to a shoot-out, one of those 3 parties will have a bit of an unfair advantage...