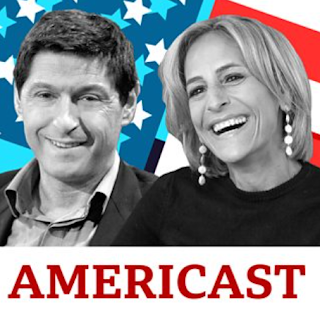 The BBC's Americast has landed.

It's hosted by Jon Sopel and Emily Maitlis. Or 'Sopes and Maitlis' as they call themselves - though Jon does occasionally slip into calling his old friend and co-host 'Em'.

Their 'theme tune' ends with a clip of the 'Another beauty!' exchange between Sopes and Donald Trump.

'Contains some strong language' said Podcast One. I presume that was because of Em calling the Iowa Democratic caucus "a shit-show". (She wasn't wrong though).

There have been two podcasts so far. Between the first and the second, Em had flown back to the UK.

The second one covered the State of the Union speech (starring Nancy the Ripper) and Donald Trump's Impeachment acquittal.

But it also featured a Newsnight-style Emily Maitlis interview with Kurt Volker where, after a gentle start, Em held a second Impeachment trial and placed Mr Volker in the dock for failing to be damning about his former boss, Mr Trump.

As for the Senate finding the President not guilty, 'Sopes and Maitlis, and Anthony too' focused mainly on how Mitt Romney had ruined it all for Donald Trump. A bad day for Donald apparently.

To be fair, however, Sopes countered Em over Nancy Pelosi's ripping up of the speech. Em seemed impressed but Sopes said that the overall reaction has been negative with many finding Ms Pelosi's actions petty and discourteous.

They've already got into the habit of reading out tweets praising their podcast.
Posted by Craig at 16:01