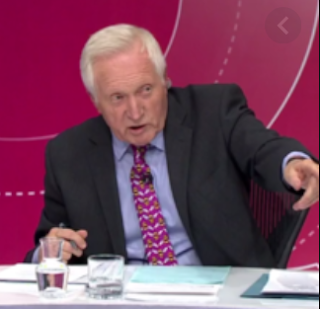 I'm assuming that his retirement means he's free to speak his mind these days without any inhibitions about BBC impartiality because he certainly has spoken his mind.

Not that most people will ever see him as anything other than the embodiment of the BBC, and I suspect many will see him as also speaking the BBC's mind here.

He certainly put a broad range of adjectives to use: The Government's plans to curb the licence fee are "pernicious", Boris's behaviour towards the BBC is "arrogant", "childish", "peevish" and "unpleasant", and Boris and Dom and "ignorant" and "floundering".

(Admission: I'm not innocent of this kind of language. About ten years ago I thought I'd finally captured the tone of his Question Time chairmanship with regards to certain right-wingers with the phrase "smug malice").

His criticism of Boris's personality is particularly striking. It's a very personal attack, accusing the Prime Minister of being a liar in both his public life and his personal life, including towards his family. Not very kind, is it?

Echoing one of the BBC's main themes during the general election, he says, "Nobody trusts Boris Johnson. Who could trust Boris Johnson?".

On the subject of the BBC, David Dimbleby takes the Clive Myrie line that the public needs educating:

It is a way of damaging and undermining the BBC that is dangerous and should be resisted forcefully if public broadcasting is to survive. Anything that chips away at what we believe to be a good democratic process is dangerous and has to be fought against.

It has to be explained why not speaking to people is dangerous, why not appearing on television is dangerous.

I rather doubt that dialling up the hostile rhetoric in this way is going to prove particularly helpful to the BBC.

How will the public see David Dimbleby (and, thus, the BBC) here? Will they think that some of the adjectives he flung at the PM and his chief advisor might apply at least as well to him (and the BBC) too?
Posted by Craig at 13:26