In which Craig remounts his hobby-horse

If you've been reading this blog since the start you'll doubtless recall that I used to incessantly count the number of appearances of each guest on the BBC News Channel's Dateline London to show that the programme's panels were massively stacked against people with right-leaning views.

I did that for years - so much so that one contributor would email me to ask me for the latest stats to see if he was getting more or less invites than other guests.

And then, finally, I gave up counting.

Apologies to my Dateline friend - though, fear not, our Alex is still doing splendidly, and making the Sky papers scintillate alongside the delightful Polly MacKenzie, and brightening up Twitter, and much, much else besides - but years of proving a programme to have a very heavy inbuilt political bias left me thinking that I'd flogged that particular equine to death. Especially as I had proved it.

(I'm squeamish about The Grand National, so I'm all for not flogging equines to death).

Plus, I'd like to think that when the programme began to balance its panels better that my shaming stats had helped make that so.

Back in the day, Dateline's main presenter was Gavin Esler, a man whose biases I also tracked.

As could have been predicted from his biased behaviour and comments as presenter - a bias somewhat disguised by his mild-mannered 'nice guy' TV persona - he went off and tried to get elected in the European elections last year, standing for the pro-EU Change UK in London. I'm sure he thought he'd win, but he lost. The tone of his public pronouncements, especially on Twitter, was a million kilometres away from his 'nice guy' TV persona. He turned into a sort of less pleasant version of Alastair Campbell. He even made his former Newsnight colleague Paul Mason sound gentle, kind and reasonable in comparison. He's now Chancellor of the University of Kent.

His replacement, Carrie Gracie, is much better - a consummate professional. (I do hope she's paid more than he was.) I like her.

But, as noted on an earlier thread, it looks as if I might need to start counting again. (It would be no hardship.)

Today's panel used to be typical. But, maybe since I've stopped chronicling it (a pathetic fallacy on my part?), it's slipped back again because today's panel was a violent throwback to Classic Era Dateline.

Every single member of today's panel - Michael Goldfarb, Yasmin Alibhai Brown, Abdel Bari Atwan and Eunice Goes - comes from the left side of the usual political spectrum. There wasn't a right-leaning guest in sight. A clean sweep.

How can the BBC justify that? 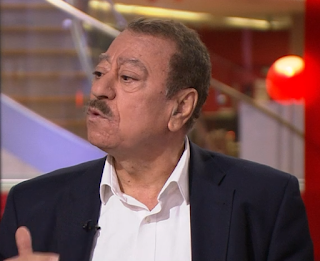 P.S. Wonder if Bari is still the 'most regular' guest (not necessarily involving prunes)?

For those not overly familiar with the programme, Palestinian 'journalist' Abdel Bari Atwan was the most regular guest every year, for years, despite being an extreme Saddamite loather of Israel with a record of highly incendiary remarks hoping for the end of Israel and lots of deaths in Israel - a very controversial man.

Gavin Esler was his friend and used to help promote his books.

Despite Gavin going, the indefatigable Bari is still clearly in with the BBC. Him and that other flame-thrower Yasmin can shout away at each other to their hearts content forever for a licence-fee-funded fee no doubt - unless something is done about it.

First, one they'll like: Send in David Dimbleby to play all three monkeys, maybe?

Second, one they ought to like: Think! If you have a panel of four left-wingers people might think you're biased and want to punish you by taking away your public funding or abolishing you. So balance your panels!
Posted by Craig at 18:40