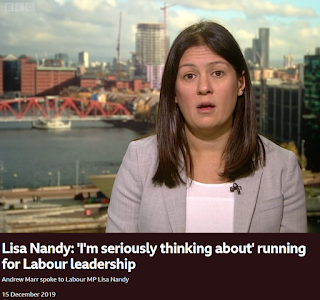 From her interview with The Sunday Times today we learn that Labour leadership contender Lisa Nandy refuses to appear on The Andrew Marr Show:

The Wigan MP, 40, has also declined to appear on the BBC’s Andrew Marr programme, filmed live in the capital on a Sunday, because it would mean being away from her partner, Andy Collis, and their son, Otis, 4. “I’ve refused to do it for the past three years because I won’t go down to London at the weekend, stay overnight on the Saturday, do a 10-minute interview and then come all the way back,” she says.

First thought: How odd! Has she never heard of Skype, or the BBC's studios in nearby Salford? Plenty of Marr Show interviews are conducted via video links, so she doesn't need to waste her weekend travelling to London and back, does she?

Second thought: Hmm, but I'm sure I saw her on The Andrew Marr Show recently...

So she has done the show without needing to go to London after all. Not quite what the interview was implying.

Still, if she's refusing to deal with 'the London bubble' on their terms and sees The Andrew Marr Show as part of the problem with journalism today (as the article suggests), then all power to her elbow. Or some power anyhow.
Posted by Craig at 07:01