Here we have Newsnight’s presentation of the individuals trying to get themselves elected as leader of the Labour Party. First I have to address Emily Thornberry’s defence against the charge of antisemitism.

Thornberry’s ugly little diatribe did the opposite of what was intended if indeed exonerating herself from the charge of antisemitism was her intention.

I admit it’s tricky, trying to suck up to four million potential voters who very likely conform to their religion’s default hostility to Jews, while at the same time trying not to fall foul of the Labour party’s so-called anti-racist raison d’etre. But she got it so very wrong.

“I think it was really important as I often said, that it is our duty to speak out against the far-right government of Netanyahu, and what it is that that government is doing to the two-state solution.

And what is it that the Palestinian Authority is doing, prey, never mind the “far-right Netanyahu government”, to the two-state solution?  Oh yes, rioting and calling for endless days of rage.

“Which is different from being antisemitic” interrupts Razzall, eager to remind us that “criticising Israel” is not antisemitic.

“And then to explain to people, you do that, and that is not antisemitic, but you do not blame the Jews for that.”

No, not all of them. Not the Jews who belong to certain left-wing, anti-Zionist groups; save the blame for the right-wing, Netanyahu-supporting Jews who live in or support Israel.

“And to explain to people, there is a clear disconnect. It is not the fault of some guy who lives in a flat in north London - he is not responsible for the death of Palestinian children. And people really need to understand the difference.”

The difference between the innocent ‘guy’ in London who happens to be a Jew through no fault of his own and the right-wing Israeli Jew who callously murders Palestinian children for sport.

“And time and time again, in my role as shadow foreign secretary, I made that absolutely clear. And i think that it would be right to say, that the record shows, that I have regularly called out antisemitism in my party in a very public way.

Yep. Thornberry stops short of chanting ‘Jews to the gas’ so how could she be antisemitic? She hasn’t got a racist bone in her body. (Nor any bones at all as far as one can tell.)

Because of her ‘pseudo-Sloaney with a hint of mid-Atlantic’ accent and her tic (i.e., keeps saying ‘frankly’) it’s impossible to take her seriously. She is like Corbyn and others in the Party in that they make stuff up as they go along as if trapped within some sort of ‘just-a-minute’ format and will be penalised for hesitation. And suffering from “likes the sound of their own voice' syndrome. And starting sentences with “And’ so they can continue talking nonsense on topics about which they know next to nothing without being interrupted or letting anyone else get a word in. And waving their hands (or trotters) around expressively to show off their red nail-varnish. I hope any of that doesn't put anyone off voting for her.

If anyone here is interested, here’s a video of the Labour Leader hustings that took place yesterday in front of the Jewish Labour Movement. If you’ve got the will and the stamina to watch it, you’ll see that Lisa Nandy is head and shoulders above the other candidates. (Candidates? Have I turned into Alan Lord Sugar?) (no)

Emily Thornberry seems to believe that her day - or was it days  - of glory as a stand-in for Corbs at PMQs were enough of a triumph to leapfrog her to the front of the process. No, Emily, you are vacuous, cliche-ridden, insincere and hypocritical. And spiteful. You’re fired!

The question remains. Is Nandy’s chairpersonship of Labour Friends of Palestine compatible with her support of Israel and/or the Jewish peoples’ right to self-determination? In fact, one could almost defend this by saying at least she couldn’t be accused of pro-Zionist partisanship. Which is a plus.

However, one niggle still won’t go away. I still worry that Nandy has been seduced by the Palestinian propaganda machine.


“I met a three-year-old child whose house was surrounded by the Separation Wall and was growing up without daylight. I saw a 15-year-old shackled by the ankles, who had been held in administrative detention for months without any contact with his family, access to school or a lawyer. I saw families humiliated at checkpoints on a daily basis and the denial of basic medical care as a result.

This is a movement which continually entices British MPs to visit ‘Palestine’ to view the obligatory theatrical production, a series of orchestrated anti-Israel set-ups wrought from self-pity, pathos and victimhood, specifically designed to hoodwink foreign governments into joining their quest to obliterate Israel. 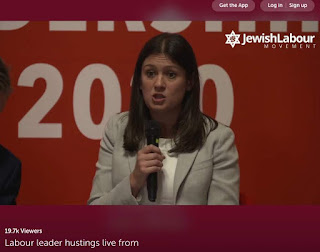 If Nandy showed a glimmer of cynicism, awareness of - or insight into that specific aspect of her own pro-Palestinian advocacy, I could be won over. She’s the only credible leader.
If you watch the linked video I think you’ll agree with me. Hope so.
Posted by sue at 17:26