Of Cockfights and Nicky Campbell 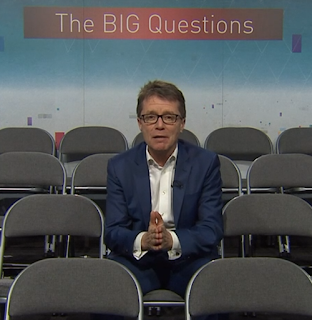 It tells the tale of how Douglas fell foul of a very unfriendly and censorious left-wing, feminist academic on a Radio 3 discussion programme.

Because of her feminist views, she herself has now fallen foul of very unfriendly and censorious people  - namely transgender militants. And it's even worse for her, as she fears physical violence from them and has two security guards to protect her, ironically both men.

Douglas says, whether she likes it or not, he's prepared to literally take a punch for her in order to protect her right to free speech. And I, for one, don't doubt that he is,

The relevance to this blog is the BBC-related tale Douglas tells in passing. The fall-out between this academic (Selina Todd) and Douglas Murray was a BBC set-up - an engineered cockfight. It was a debate about class and Douglas is posh, and Selina is left-wing. Selina obliged and was rude to Douglas...but Douglas refused to be rude back.

Straight away I knew two things: that I had acquired a new enemy and that I had ruined the programme. After all, it’s not what you’re meant to do. When the BBC prepares a cockfight, you are meant to play your part, collect your fifty quid and ask to be invited back once the bruise has subsided. If you fold your arms and say you’re not playing, the BBC doesn’t have a show. I later learned that this edition of the programme had been used at BBC training days as an example of editorial failure, which made me rather proud.

I thought of that this morning after seeing flame-flowing, race-obsessed Kehinde Andrews listed among the guests on today's The Big Questions. He's a particularly aggressive cock.

And then, while watching the Andrew Marr show, I saw Nicky Campbell, previewing that very programme, promising "very lively and controversial debates" - i.e. a cockfight.

Such is the way of the BBC, promoting healing and a less aggressive national debate while inviting the likes of Selina and Kehinde to stir the pot and make it boil over, not for the sake of free speech but purely for public entertainment.
Posted by Craig at 13:30