Babar and the elephant in the room

The Victoria Derbyshire programme (BBC Two/BBC News Channel) gave over the bulk of its one-and-a-half hours yesterday to an extended interview with Babar ("I joined Taliban in good faith but I was naive") Ahmad.

The interview was broadcast shortly after Andrew Gilligan posted a piece at the Telegraph headlined "Babar Ahmad - a convicted terrorist - is pulling the wool over the liberal media's eyes: Freed from jail, bin Laden’s fund-raiser appears to be contrite, but falls back on the old 'good faith’ excuse".

The BBC is evidently part of the 'liberal media' then.

One odd thing I noticed was that, just around the time the interview was being broadcast, the programme's official twitter feed sent out eight 'plugs' for it. They tweeted it to four very specific campaign groups and four BBC home affairs reporters...and they did it (chronologically-speaking) in this order: 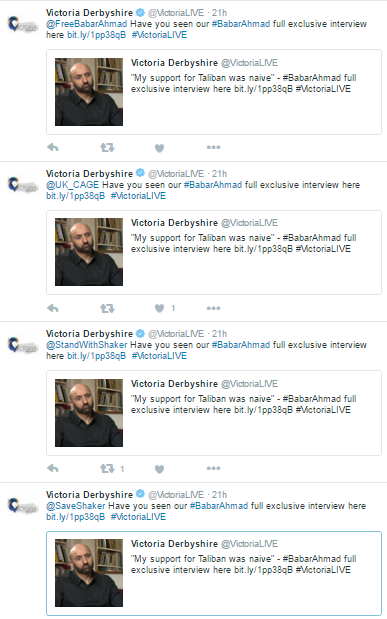