That would be "a Jewish question". Yes.

The re-exclusion from the Labour Party of Trotskyite Gerry Downing seems to be down to Mr Staines & Co. at Guido Fawkes.

(For those not aware of the story, the Jewish Chronicle has a decent summary of it here.)

The final straw seems to have been Order Order's publication of tweets from Mr Downing, including one about "the Jewish question":

Andrew Neil had the man himself on The Daily Politics today (beginning at 14:29) after David Cameron had condemned Mr Downing's re-admission into Jeremy Corbyn's Labour Party at PMQs yesterday, citing his comments refusing to condemn 9/11 and Islamic State.

AN played it in an understated way, putting quietly probing questions whilst giving Gerry Downing all the rope (and time) he needed to hang himself.

And hang himself he did.

He still refuses to condemn Islamic State and the 9/11 attackers, saying it was important to understand the reasons for their actions. (No such 'understanding' is allowed to the wicked imperialists of the West of course).

And his obsessive talk about the all-powerful 'Zionists' must have made him sound to many a viewer like an Elders of Zion-believing-style, anti-Semitic conspiracy nut (even if he isn't), thus giving force to Andrew Neil's point that what he was saying was likely to remind viewers of the sort of things that were said in Nazi Germany.

My own quibble here with Andrew Neil was that he didn't re-ask the question about why Gerry Downing had tweeted about "the Jewish question" after all his ramblings today about the 'Zionists' (followed by his quick, passing comment that "it's not to do with their actual Jewish origins as such").

Maybe AN thought that Mr Downing had shown his 'true colours' enough already that there was no need to push the point.

I still think that question should have been put at exactly that point though to fully finish him off.

Gerry Downing himself come across as a strange character. He kept jerking around and looking over his shoulder.

I suspect he was nervous lest some 'Zionist' sneaked into the studio and stole his shoe while he was busy talking to the BBC. 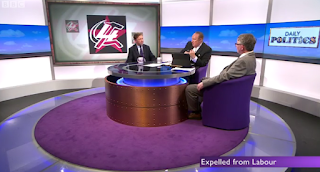 Credit must, of course, be given to the BBC's The Daily Politics for putting this centre stage.

No credit, however, goes to the so-called 'BBC journalists' responsible for the article about this on the BBC News website.

Astonishingly, though now updated with a review of that TDP interview, that BBC article completely fails to include anything about Mr Downing's tweet about 'the Jewish question'.

This is especially hard to understand as those comments are probably the reason Labour felt it had to exclude him again.

And it completely beggars belief that the BBC article's write-up of the Daily Politics interview also completely fails to mention the crucial exchanges about Gerry Downing's alleged anti-Semitism.

The BBC News website has a tendency to be particularly prone to this kind of 'lapse'.

I find it seriously worrisome and will be complaining about it.
Posted by Craig at 16:17