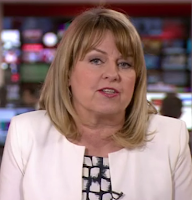 Now I want to go to the United States, because we couldn't have a programme without talking about Donald Trump.

...as Dateline has been proving lately.

As a possible sign that the BBC has largely forgotten the other candidates because of their Trumpomania, Maxine mentioned Republican candidate John Kasich.

Has she ever mentioned his name before on the BBC News Channel?

From the way she got his name wrong - pronouncing it 'Kat-chiss' rather than 'Kay-sick' - I'm guessing the answer to that is: either 'not at all' or 'not often, and always incorrectly'.

For those who didn't see it, the other topics were the resignation of IDS and the EU-Turkish deal over migrants.

On a more positive note, a decent spread of views was on offer on all subjects, thankfully - ranging from Eunice Goes on the left to Alex Deane on the right.

So when Eunice claimed that most of the people coming into Europe are refugees Alex was on hand to say that there are lots of economic migrants too. (That wouldn't usually happen on Dateline).

Even the incidental topic of a possible Brexit (which kept coming up) was prepared for by having Alex on the panel (as he's a leading light in the pro-Brexit financial service's sector campaign group City for Britain),

Something like that should be happening every week for the next few weeks.
Posted by Craig at 14:16