Did you know you were contributing to Mahmoud Abbas’s £8million palace? No, neither did I. Nor did I know that I was contributing to the wages of murderers, including Amjad and Hakim Awad, the Palestinian cousins who killed Ehud and Ruth Fogel and three of their children in an unimaginably bloodthirsty manner.

I know OMG the Daily Mail is not the most reliable source, and I understand that it puts a sensationalist spin on any gossip, rumour or scandal it lays its hands on, but this isn’t the first time I’ve heard murmurings about this, and I’m glad at least someone has managed to set it out in no uncertain terms, so that it reaches a wider audience. Even if only to make people think, and ask a few questions. 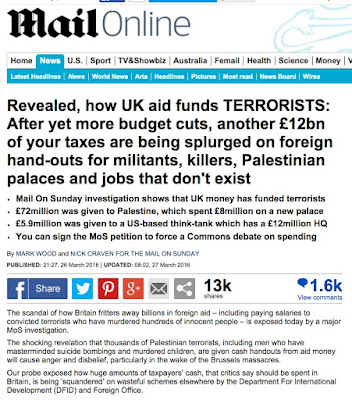 On Broadcasting House yesterday morning, the papers were reviewed by Digby, Lord Jones, amongst others. He mentioned the MailonSunday’s article about foreign aid and he did say it features a petition one can sign, but he failed to tell us, specifically, that Palestinian criminals were amongst the beneficiaries of our cash. He said things like:

“We’re a generous country; I think every Brit would be proud of that.” [...]”The underlying message is that we’ve ring-fenced 0.7% of our GDP” [...]  “I’m sure lots of it is going to good things, but when we gave £5.9million to the Americans? We paid £13,00 for a rich Texan businessman to fly to London for a summit?” ...[...] “It doesn’t mean don’t give money to the developing world. What it does mean is just look  more carefully at where it’s going”