On the subject of The Now Show, the opening episode of the latest (469th) series, first broadcast a week last Friday, treated us to Punt'n'Dennis's take on the whole European referendum shebang (as they'd probably call it).

Radio 4 knows the show is under particular scrutiny for pro-EU bias.

Even Feedback covered the controversy over one especially pro-EU feature during the programme's last series, with the BBC's political advisor Ric Bailey telling Roger Bolton that The Now Show is subject to the BBC's impartiality guidelines and will play its part in achieving 'due balance'.

This latest series, therefore, began with an obvious attempt to show that The Now Show is trying to be more even-handed in its barbs over the coming weeks...

...except that they couldn't really pull it off.

Yes, they mocked both the 'Remain' and 'Leave' campaigns, but they spent twice as long on mocking the 'Leave' side and described a list of 'Remain' supporters as 'impressive'.

Yes, they sang a spoof EU anthem (Beethoven's big tune)  mocking the 'Leave' side but the 'balancing' second spoof EU anthem didn't mock the 'Remain' side but sang the 'views of the bored British public' who can't make head nor tail of the whole thing and don't think it matters instead (ending, inevitably, with a Donald Trump joke).

And, yes, they made jokes about 'Leave' campaigners not liking a book because it contained the word "panini" (i.e. the old Now Show 'xenophobia' joke about UKIP types).

And, for a classic example of duly impartial Radio 4 contemporary political comedy, here's how it all started last week:

Thank you. And what a fantastic time to be Vladimir Putin, Everything's going his way: America considering giving its most important political job to a man with no experience of politics; Europe tearing itself apart over refugees arriving from a civil war we started in the first place by toppling Saddam and Gaddafi; while Britain stops for four months to argue whether or not to leave Europe anyway.


The migrant crisis is also still in the Now Show comedians' minds (though, so far, sexual identity has been their main recurring theme, with not one but two lesbian comediennes doing routines on the subject over the past two weeks). 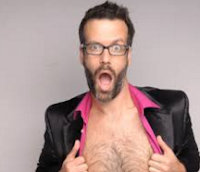 As noted in the comments earlier, Jon Holmes hinted heavily about "racism" over people's concerns about migrants this week, and the famous Marcus Brigstocke focused on the migrant crisis last week.

That Marcus Brigstocke bit was especially puzzling. For the most part it was standard Marcus B: lecturing with jokes (funny for those who like that sort of thing, as funny as piles for those who don't), entirely predictable in its pro-migrant preaching. Then suddenly he swung into attacking his lentil-eating "lefty friends", and Corbynistas, and people advocating open borders. He then reverted back to his original position.

But where did that abrupt burst of 'right-wing demagoguery' (aka good sense) come from? Was Marcus outing himself as a 'soggy centre-left' comedian (rather than a Jeremy Hardy/Mark Steel-style far-lefty) after all? Was he complying with BBC demands to try to pretend to be balanced and impartial?
Posted by Craig at 10:39