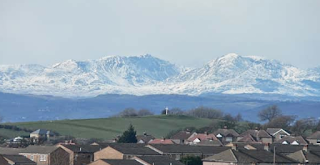 Veterans of our curious little blog might recall, a few years back, that I mentioned my family's Good Friday walk to Morecambe's Bronze-Age barrow to witness our local Methodist church's annual carrying and placing of a cross atop that ancient man-made mound.

I found it moving.

Four generations of my family again saw that very cross today, gleaming in the inevitable Morecambe sunshine against the distant backdrop of the Lakeland hills.

I found that moving too.

And then we all started drinking.

The toddlers drank huge amounts of milk and orange. Their dad drank pale ale, while the rest of us older-and-wiser menfolk drank liver-defying quantities of red wine (the blood of Christ) in remembrance of our Lord and Saviour (not that anyone mentioned Him.) And three generations of our womenfolk honoured the Blessed Virgin by consuming government-guideline-defying units of New Zealand sauvignon blanc (without mentioning Her either).

We then collectively read Rabelais and died of alcohol poisoning. (My last words were: "I'm not bloody Oliver Reid you know").

All of which reminds me that at least two BBC Radio 4 programmes discussed the date of Easter this week: Monday's Beyond Belief and Tuesday's Making History - and specifically the question of why Easter is 'a movable feast'.

The BBC bias angle was especially blatant on Beyond Belief. All three guests, responding to Justin Welby's suggestion that the date of Easter be fixed, strongly rejected Archbishop Justin's proposal. Not one of them defended it. Ergo: #bbcbias.

That said, I learned a lot from both programmes.

It turns out that the Western Church bases the date of Easter on the Gregorian solar-based calendar whilst tracking the lunar-based Jewish calendar in the light of Passover, and that this results in complications. The date of Easter can fall between 22 March and 25 April as a result. The Eastern church, however, still follows the Julian calendar and seems to be much less tied to Passover whilst continuing to use an anti-Semitic liturgy. An academic - linking to official Catholic belief - dates the resurrection of Christ to Sunday 5 April 33 AD. (Others are less sure - to put it mildly). And what about 'Missing Wednesday', the day the New Testament seems to miss? Plus there's 1928 UK legislation in force to fix the date of Easter which has never been acted upon.

Food for thought...which is all I can manage at the moment, except to give you a Bach Easter chorale: