'Good fences make good neighbours'? Not according to Tom Heap


Like Quentin Letts of The Daily Mail, I do like a bit of Countryfile on a Sunday night. I really do. (And, like Quentin, I ignore all sneerers about the programme).

So I didn't really want to go to town on Countryfile regular Tom Heap over his pro-EU-biased Costing the Earth edition on the possible consequences for the environment of a British exit from the EU...

But it was so biased I felt it had to be done.

(News-watch's David Keighley had also written a powerful critique of it - and he's escalated the matter well beyond the blogosphere).

Reflecting on that though, some of Tom's pieces on Countryfile are exemplary in offering contrasting views, allowing viewers to make up their own minds and not appearing to come down on either side of most arguments - such as last week's piece on offshore wind farms v birds.

Others are less exemplary, such as the one on gypsy/traveller sites we looked at last year (which fairly obviously took the side of the 'travellers') or his Panorama on genetically modified foods (which seemed to be pro-GM food against the likes of the Soil Association and Greenpeace) - a comparison which shows that things aren't black-and-white here.

What then to make of today's Costing the Earth entitled Beasts of the Border?: 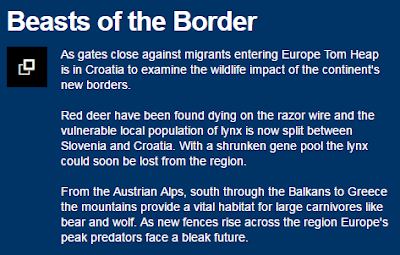 If you to listen to it all the way through you will hear a variety of people - academics, hunters, social democratic politicians, environmental activists, scientists - all of whom believe that the fences being erected across parts of Central and Eastern Europe and the Balkans to stem the flood of migrants are wrong - wrong for wildlife and wrong for human beings.

They believe the fences are wrong not just because of the wildlife dying on its barbed wire but because the fences don't work in keeping out the migrants and the fences evoke the dark past of Europe not the hopes of its present.

Everyone spoke out against the fences, and Tom Heap's narrative didn't challenge them or contradict them once. It only reinforced them.

It was one single hymn sheet, and every last person sang from it.

I'm not exaggerating about that. That's exactly what this programme was like.

And I have to say that I did expect someone from Slovenia or Hungary (or wherever) to be invited on - if only for the sake of appearance - to put the other side of the argument. I was sure some 'sop to BBC impartiality' would pop up to defend the fences and the governments that erected the fences, or to argue that the fences are working.

If anyone thinks I must have missed something (or am suffering from confirmation bias), please listen for yourselves. You won't find a supporter of the fences - or a point in favour of the fences - anywhere, no matter how closely you listen. (Or a critic of the flow of migrants either for that matter).

It was quite powerful though. I really had to stop myself from getting sucked into it.

In fact, come to think of it, this Costing the Earth would make for a powerful pro-EU, 'no borders', pro-migrant propaganda piece, if a campaign group was canny enough to take it up and run with it in a big way. (The pro-EU message was a definite undercurrent - if only explicitly from the contributors).

That's not what the BBC is supposed to be about though, is it?

And that's another black mark against Tom Heap (in my book).
Posted by Craig at 21:56