A quick run through of some of my usual subjects... 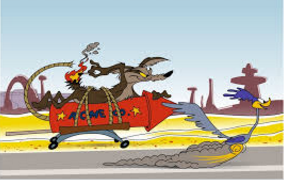 I didn't get very far with this week's From Our Own Correspondent. Kate Adie's introduction to the first report, talking of "The desperate and dispossessed...attempting to make the journey from Turkey to Europe", saw me off.


The Now Show probably doesn't use canned laughter, but I do wonder sometimes. I barely raised a titter this week. The audience sounded as if it was about to collectively wet itself with laughter. It didn't help that Jon Holmes did a bit on the Queen, Brexit and the Sun which relied on jokes about the Queen being German and Prince Philip being Greek. How lazy is that?


I forget to round off our survey of political bias on the latest series of Radio 4's From Fact to Fiction (aka From Fact to Propaganda). We left our running tally at 6 episodes for the Left, 1 with no obvious agenda (disputed), and a big fat (undisputed) 0 for the Right. The final episode - a piece about José Mourinho by Mark Lawson - was unpolitical, so the final tally remains as above - except, of course, for the 'with no obvious agenda' category going up to 2. Clear bias.


One of the things I've spotted before about BBC Breakfast paper reviewers is that they tend to be drawn from an uncontroversial, vaguely centrist pool. The rare strongly-opinionated ones. however, tend to come from the centre-left wing of the political spectrum. Simon Fanshawe - by my reckoning the most regular Breakfast reviewer, is one example, and this morning's reviewer, writer and social justice campaigner Paul Vallely, also falls into that category. He denounced the government over social justice issues and joined the presenters in the latest BBC 'two minute hate' against Donald Trump. Labour's John McDonnell, however, was also held up for criticism. (It's that 'soggy BBC centre-left' again).


Ted Cruz was the subject of this week's Profile on Radio 4. It was presented by intermittent John Peel-sound-alike Mark Coles. The blurb on the programme's website begins, "Senator Ted Cruz is a hardliner, even by the standards of his native Texas..." The reaction on Twitter was unanimous: Mr Cruz is "even worse than Trump", "totally terrifying", "deeply unpleasant", a "political horror" and "basically the total nutter version of TheDonald". Having listened myself, it's not hard to work out why they reacted like that. Mark Coles will be pleased.

Talking about the BBC's US election coverage: Charges of overkill and bias (against Trump) were featured on both this week's Newswatch and Feedback, and Jon Sopel was on both defending himself and his colleagues. Oddly both programmes steered clear of the 'Curious Incident of the Candidate in the BBC's coverage', as per Conan Doyle - the candidate being Hillary Clinton, plus all the scandals surrounding her and the startling fact that her candidacy might be at risk because of them:

It wouldn't be Feedback if Roger Bolton wasn't doing his pro-BBC spin job on the charter renewal. This week saw Radio 4's 'champion of the listener' (beginning at 15:39) cited Tony Hall's response to a government report about the BBC's governance. He then went on to say, "Tony Hall pointed out that if this happened" the corporation's independence could be at threat. The words "pointed out" were Roger Bolton's. He could have said "said", or "argued" or "claimed". But, no, he went for "pointed out", as if something true was being "pointed out".

To end on a more positive note though: Dateline London was good this week, especially on Obama's criticism of the UK and France and the EU-Turkish deal over the migrants. The range of contrasting views was to its credit. The programme's resident Eurofanatic, Marc Roche, unsurprisingly grabbed the opportunity to try and persuade us to stay in his beloved EU. Gavin congratulated him on being awarded the Légion d'honneur by the French government. "What on earth have you done to deserve that?", he joked. "Exactly what I will say next", replied the deadpan Marc before launching into a defence of France and the UK against Obama's criticisms. Unlike The Now Show, that made me laugh.
Posted by Craig at 09:33