If you’re still undecided, not yet sure which way to jump, here’s something that might help you make up your mind.

If you’re in the EU you’re funding illegal settlements. Not a lot of people (probably) know that, but something we do all know is that settlements are considered to be an obstacle to peace in the Middle East, if not the obstacle. The Palestinian side has managed to persuade many people who neither know nor care about the minutiae of the Oslo Accord and the status of areas A, B and C (or for that matter, the deviousness of the Palestinians) and has succeeded in convincing them that this is so. They even managed to get the world to accept that a freeze on settlement construction was a legitimate “precondition” and not just an excuse for avoiding talks.

Even though Israel has very good reasons to dispute it, let’s agree that the majority ‘world view’ firmly holds the belief that settlements are illegal under international law, and are “the” obstacle to peace.

Maybe you missed this story because it was in the OMG The Daily Mail. 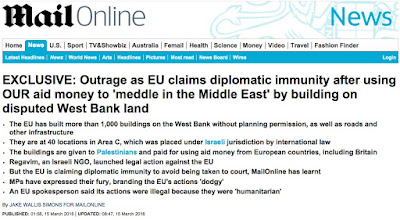 Below: a picture of “Dutch diplomats and Palestinian officials” studying maps of the region in a room decorated with portraits of a saluting Yassir Arafat and a smiling Mahmoud Abbas. They’re searching for suitable land upon which to erect settlements (funded by us.) 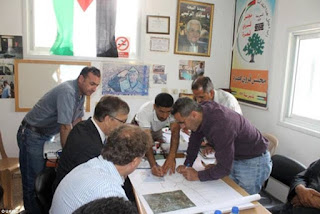 Did I mention that these particular settlements were not homes for Jews? They’re for Palestinians. Ah, well that’s different, I hear you say.

However not everyone thinks it’s different; almost unbelievably, to avoid being taken to court for “building unauthorised  settlements and roads on land placed under Israeli jurisdiction by the Oslo Accords, to which the EU is a signatory” - guess what??   EU bureaucrats are claiming diplomatic immunity.

Now you might well think, it’s fine. The Israelis don’t like it up ‘em. There they go, building settlements willy nilly, obstructing the peace that the innocent Palestinians would dearly love to achieve, and the minute the Palestinians do the exact same thing, they don’t like it. Taste of their own medicine and all that.
That’s what you would say. What EU would say, maybe.

But that’s not quite right. There’s much more to it, and at least two of our own MPs get it.

'The EU should comply with the law. It should not be meddling in the Middle East, then hiding behind some dodgy use of diplomatic immunity,'.

'This is a gross waste of taxpayers' money. It's another example of money given to the EU over which Parliament has no real oversight.

'The British electorate is contributing to this but we are completely unaware of how it's being spent. We don't know who is spending this, and we can't vote them out.'

He added: 'No wonder the EU think they're above the law. They are untouchable.'

Mr Percy also expressed serious concerns that the EU is 'undermining the Oslo Accords' and 'damaging attempts at peace' in the Middle East. 'Not only is it a waste of taxpayers' money, it is morally questionable,'

This month, the EU approved a further £193million of aid to the Palestinian Authority.

'It is deeply concerning that the EU falls back on diplomatic immunity after breaking planning regulations,'

'The UK Government would take a very dim view of a friendly state doing that to us.

'Diplomatic immunity is there to protect envoys from unjust treatment, not to protect the high-handed behaviour of arrogant bureaucracies.'

'The EU maintains that it is based on fundamental principles of rule of law and support for democracy. But when this clashes with its bureaucratic bungling, neither rule of law nor democracy seem important.'

So for anyone teetering on the brink as far as Brexit is concerned -  hope that helps. If you're wondering, I don't think the BBC has reported this.  Please tell me if I'm wrong.