Continuing with the catch-up posts from yesterday.... 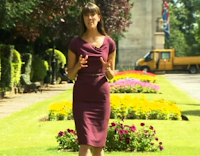 Sue has already praised Shaimaa Khalil's piece about the Pakistani assassin and his large number of murderous supporters in yesterday's From Our Own Correspondent. What else was there on this weekend's edition?

Well, the lead item was about....drum roll, followed by surprised expressions all round....Donald 'The Donald' Trump. (Bet you didn't see that coming!) It came from the BBC's North America editor Jon Sopel and didn't seem particularly biased to me. It did seem very stylish and enjoyable though. I find him a much more engaging communicator than the far-more-plodding (and politically partisan) Mark Mardell.

As well as pieces on attempts to save ancient calligraphy in Afghanistan and a piece on the perils of driving in Burma (after the old military dictatorship, apparently on the advice of soothsayers, ordered that everyone should drive on the right-hand side of the road - despite all Burma's cars being left-hand drive)...

...there came a piece from the BBC's Berlin correspondent Jenny Hill, who's been gaining something of a reputation for bias over the past year after projecting strong pro-migrant sentiments in her reporting (a perception that didn't exactly diminish after she cheerfully yelled 'Welcome!' to migrants as they arrived in the country last summer).

Being Jenny Hill, a moral was then drawn: A "dark Germany" still exists - the "dark Germany" that attacks migrants, burns migrant shelters and daubs swastikas on migrant buildings. She identified that with two political parties - the Neo-Nazi National Democratic Party (NPD) and Alternative for Germany (AfD). Quite whether the latter deserves to be lumped in with the NPD and the rest of "dark Germany" is open to question (though evidently not in this BBC reporter's mind).
Posted by Craig at 12:24

Labels: 'From Our Own Correspondent', Jenny Hill, Jon Sopel