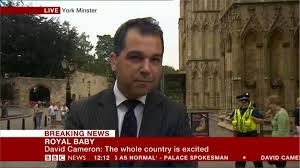 A couple of days back, I posted something about Danny Savage's BBC News at Six report from the Greek-Macedonian border, which I felt to be clouded by emotionalism.

I didn't actually expect to see Danny Savage there at all. He's usually the BBC's North of England correspondent. Looking at his Twitter feed, however, it's clear that the BBC chose to dispatch him to Greece (a couple of weeks ago) in order to help them cover the migrant crisis.

Less than two weeks into his new assignment, he appeared on this morning's From Our Own Correspondent to give his impressions of what he's seen over the past few days (an episode with the title - closely echoing Evan Davis's choice of words on Newsnight - "Trapped in a Dead-End").

His piece, concentrating on the plight of the migrants, ended with these words:

At times over the past few days, as I've looked at young families stranded without cover in the fields by this border, I've felt like crying.

Having seen his BBC News at Six report, that really doesn't come as a surprise to me.

Journalistic objectivity seems to be going out of the window.
Posted by Craig at 21:18

Labels: 'From Our Own Correspondent', Danny Savage