Currently top of the “most Popular“ list in the Spectator’s sidebar is Douglas Murray’s article : “A terrorist attack has happened in Europe. Let the standard response begin...”
Not the snappiest of titles but the illustration makes up for the lack of directness: 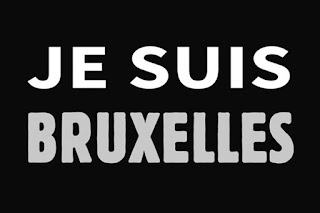 It was a busy day in our household yesterday so we didn’t have much time to keep an eye on the BBC. When we did switch it on, we plumped for Sky. Lack of directness, in this case anyway, was not one of Sky’s shortcomings.

BBC Watch was keeping an eye on the BBC website, where something funny was going on in the editorial decision-making department. To use the actual “T” word or leave it out? “Brussels blasts” was one solution. "Brussels explosions" was another, and “deadly #BrusselsAttacks” yet another. Finally they gave birth to: “Brussels terror attacks” Phew. Glad they got that out at last.

Today they’re mostly featuring the virtue signalling. Jenny Hill, Matthew Price and various reporters who’ve been enthusiastically dishing out warm welcomes to refugees on behalf of others have now turned their energies towards all the hashtag stuff, the candles, the messages and whatever daft symbols of empathy and solidarity they can dream up to show they care. The Dianafication of #terrorattack.

The search is on for a Muslim ‘good news’ story to represent Good Islam, Douglas Murray reminds us. Look out for the best one.

There are plenty of ‘experts’ ready to analyse and agonise. Who’s to blame? Channel 4 had Matt Frei interviewing a French expert who announced it was the fault of the security services cracking down indiscriminately on people merely because they were living in impoverished neighbourhoods, and, of course the resultant oppression and disenfranchisement. Naturally that would cause one to blow oneself up, non?

There is something inherently Spike Milliganish about blowing oneself up. It’s an enigma - like spontaneous combustion, and quite unlike blowing other people up. It seems like a blunder, so tragic as to be comic.

Only devout followers of a religion, who believe they’re off to Paradisio would do such a thing. It’s the absolutely daftest thing one could ever dream up. It’s the phenomenon which fits the  epithet “you couldn’t make it up” most perfectly of all.
Posted by sue at 15:38