A Tale of Two Programmes 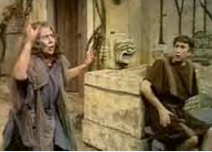 It's good to see that some BBC One viewers found the channel's reporting from Calais and the Greek-Macedonian border to be as biased as I found it to be last Monday.

This week's Newswatch had a small chorus of complaints about it.

The first concerned the report by Danny Savage, which I also took issue with:

The reporter made a very big issue about a man in a blue coat being hit by a CS gas canister fired by the authorities. However, he completely failed to mention that the same man, moments before being hit by the canister, was hurling a missile [actually, two missiles] at the security forces manning the border. This can clearly be seen in the same clip. Talk about one-sided reporting - you seem to be siding with the 'frustrated migrants' all the time.

On the same night's coverage from Calais came these complaints:

Once again the BBC shows the migrants as the victims, and those nasty French police are evicting them! I do find your news coverage always seems very one-sided.

I was watching the news on the 29th February to watch the coverage of the clearance of the camp in France. It always seemed like it was on the one side. There was criticism of the police. There was either acting, firing tear gas. It just seemed like they were onto the police all the time. But they didn't go on about the other side, the way they were acting - throwing stones at the police, and everything. If you're going to report the news don't report it biased. Report it the way you see it.

A short BBC response was then read out:

Our aim is to ensure all the different elements of this complex story are covered, from personal stories and the situation in the countries of origin to the disruption that the presence of thousands of migrants in the EU has caused - including clashes with the police and border forces. Our role is to explain what is happening and why, and we endeavour to reflect a range of voices and angles, and to provide context to help explain the causes and effects of migration.

At least Newswatch gives voice to such concerns and does so pretty fairly.

Meanwhile, over at BBC Radio 4's equivalent programme Feedback Roger Bolton was busy interviewing someone from a pro-BBC pressure pressure group - Colin Browne of The Voice of the Listener & Viewer - about the future of the BBC.

It was the usual kind of thing. Colin, the 'expert', giving his take on the BBC and the government and Roger, the impartial presenter, backing him up: The BBC is great. Nearly everyone loves it and wants to keep it as it is. Woe, woe and thrice woe for the BBC though (as a result of the government's license fee deal)!!

Maybe it's time for the Newswatch team to take over Feedback.

Out with Roger Bolton, in with Samira Ahmed!
Posted by Craig at 10:10