See-saw, Marjorie Daw went the up and down mini debates in the House of Lords, which have been triggered by the government’s plans to prevent local authorities from participating in the Boycott, Divestment and Sanctions (BDS) Movement against Israel.

NHS trusts, councils, universities, student unions, and other public bodies will be prevented from boycotting foods and products from Israel.
The government believes that councils and similar bodies should be attending to local issues, not taking it upon themselves to play politics.

A good number of MPs in both houses of parliament are fundamentally hostile to Israel.
For example, here’s Baroness Tonge (Ind LD) on 1st February 2016  House of Lords: Palestine”

The see-saw of a debate went up and down, up and down; having began on ‘down’, it eventually crept up.  A contribution from Lord Polak (Con) included:

Does the Minister agree that, instead of political point-scoring, Members of this House—I draw the attention of the House to my non-financial interests—could use their influence with the leadership of the Palestinian Authority to encourage them to stop inciting their young people, and really help the Palestinian people by encouraging them to return to the negotiating table without delay?

So it’s not all completely hopeless, then. Despite the BBC's continuing silence on the matter, they’ve heard of  Palestinian incitement. This is probably due to a presentation that was given to a delegation of MPs by Palestinian Media Watch during a recent fact-finding and trade mission to the region.

Along comes Lord Grocott (Lab) to put a damper on things again.

“.......Israel, which for more than 50 years has violated international law by the occupation of a neighbouring country, by the building of a wall and by the continuing illegal occupation that makes a two-state solution nearly impossible? Is it not time that we had a more robust response to these flagrant breaches of international law?”

Later, the thrust wends its way upward once more, by way of  Lord Pannick (CB)

“My Lords, did the Minister see the report in the Times last week that two Palestinian journalists in Gaza had been arrested and tortured by Hamas because they had written newspaper articles critical of that administration? Can she assure the House that there is no question of recognising a Palestinian state associated with Hamas until basic civil rights are respected?”

On 23rd February 2016 a ‘short’ debate was instigated by Lord Grade of Yarmouth aka Michael Grade, formerly of the BBC. He spoke against the BDS movement.
This debate was not very well attended, but it at least it was tentatively sympathetic to Israel. I won’t even snigger at Lord Rotherwick’s “infitada” -  a tasty dish perhaps.

There was a palpable degree of sympathy with Israel’s plight, despite the requisite reservations about the policies of the present Israeli administration. There was even some cautious criticism of Hamas. So are things looking up?

“To ask Her Majesty’s Government what advice they have given to local authorities and other public bodies concerning boycotts of goods and services from the Israeli settlements in the West Bank.”

Well, you can guess what ensued. “It’s not an Israel-specific policy” came the response from the minister tasked with defending what many people regard as indefensible.

At the heart of the matter is the fact that the Palestinians have successfully established the dubious concept that ‘settlements‘ are “the obstacle to peace”. Mahmoud Abbas got away with constructing a simplistic misconception from a highly complex and widely misunderstood situation, even managing to wangle preconditions around it.  They convinced their sympathisers that all construction work (for Jews) in certain areas constituted intolerable belligerence on Israel’s part, while their own blatant acts of belligerence, terrorism and aggression were facts of life.

“Has the Minister had a chance to check what the Prime Minister said yesterday in answer to a Question about settlements? He said that,“the first time I visited Jerusalem … and saw what has happened with the effective encirclement of East Jerusalem—occupied East Jerusalem—I found it genuinely shocking”.—”

That was, of course, David Cameron’s answer to a question put by the Labour member for Bradford East, Imran Hussain.

“Last week, together with several of my hon. Friends, I visited Palestine, where we went to the home of Nora and her family, who have lived in the old city of East Jerusalem since 1953. Israeli settlers, however, are now trying to force Nora from her home of over 60 years. There are many other cases like that. Does the Prime Minister agree with me that illegal settlements and constructions are a major roadblock that hinder peaceful negotiations? What are this Government doing to help prevent these infringements into Palestinian lives and land?”

Another allusion to ‘settlers’ and illegal settlements and obstacles to peace. Back to square one. Caabu crows. 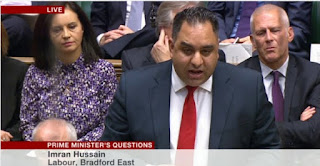 But it’s not all bad. There are one or two encouraging signs, e.g:
Lord Hamilton of Epsom (Con):

My Lords, I was in Israel last week as a guest of the Israeli Government when my right honourable friend Matt Hancock announced this guidance that he was giving to local authorities. As both Israel and the United Kingdom are members of the WTO, surely it is illegal to impose these boycotts. They would actually be against the law.

My Lords, I just wish to repeat what I am saying all along: this guidance is not about Israel per se. While what my noble friend says may have validity, (the settlements are a contravention of international law, that we deplore them and that they should not be there,) I would say that boycotts are counter-productive and should not be taken by local authorities unless there is already a government action in place.

Much of the hostility towards Israel that can be found in the general public, in academia, in the press and among the political classes can be attributed to the BBC’s lack of thorough, even-handed and honest reporting, not to mention the heavy-handed pandering to Islamic religious sensitivities that plays a major role in all this - in addition to the old fashioned Arabist element that still exists in certain quarters.
Posted by sue at 16:19