A fan of Uncle Bob's?

Here's an odd one from Charles Moore in the Telegraph: 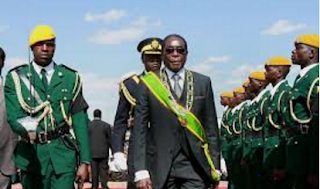 Many happy returns, too, to Robert Mugabe, the tyrant and murderer who has ruled Zimbabwe since its independence in 1980. His 92nd birthday this month is being compulsorily celebrated in his country.

On the BBC News channel, I watched an astounding dispatch from the festivities. The reporter, Nomsu Maseko, explained how thousands, their spirits undampened by rain, had turned out to cheer and “some couldn’t contain their excitement”. She noted that Mugabe was “in remarkably good shape” with “astounding presence of mind”. She admitted that his party was subject to some criticism, but quoted him to show that he was determined to “address tension and in-fighting”. She added that “many still praise his leadership skills”, finding one of his ministers ready to do just that on air.

Is Ms Maseko, I wonder, the victim of the often misguided BBC policy of using local reporters in far-flung countries on grounds of “diversity” (and saving money)? In nasty places like Zimbabwe, local reporters can be subjected to pressure by the regime in a way that British ones cannot. If that is so in this case, the BBC should protest to the authorities, not broadcast her pro-regime propaganda. If her preposterous report is how she truly sees the old monster, why is the BBC employing her?

That "astonishing presence of mind" bit was particularly striking, wasn't it?

In fairness to Ms Maseko though, she does also say though that "many have criticised the lavish birthday party, accusing the ruling Zanu-PF of being insensitive to the needs of the poor as the country faces its worst drought in decades".

Nomsa Maseko has been the BBC's Southern Africa correspondent since February 2010. She's based in the Johannesburg area, where she'd previously worked for talk radio.

Her highly active Twitter feed is fascinating. Reading through it I'd say she's not a fan of President Zuma of South Africa. She re-tweets swathes of negative stuff about him. In contrast, her tweets about Uncle Bob Mugabe, are very odd. Besides quoting from his speeches a length, there's nothing but this kind of thing: 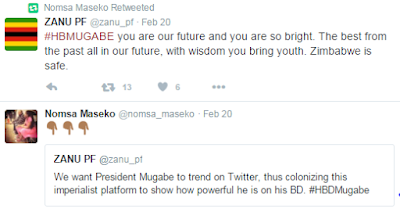 Is she merely being ultra-cautious in order to ensure she keeps 'getting the gig' when it comes to being allowed to report the big events in Zimbabwe by the Mugabe regime (as they might not take kindly to her tweeting negative stuff about their leader)? Or is she actually simply a big fan of Uncle Bob's?
Posted by Craig at 05:31