When I switched on the radio this morning something caught my attention. A woman was  was saying:

“I think there’s lots of progress that has been made, but not enough; and for me it’s about, first of all, a universal offer to every child.  ... to offer them a chance to learn an instrument.”

My ears pricked up. I know a bit about this. She went on:


“That sounds very straightforward. It does happen in England, it doesn’t happen in Scotland or in Wales.

But the offer, that it should be normal for every single child to learn an instrument and to participate in music, to me seems absolutely fundamental; there has been progress in that.  But I think there’s a major problem when you get to the end of that first experience. There are so many barriers for every child, for how, if you want to progress, can you progress to the next stage and even more if you want to progress to the very high level, what are the barriers?
I mean, one thing after another, we put barriers in the way. If we were to say only some children could progress in maths, there would be an outcry, and yet for some reason we still talk about music of any genre as if it’s an added extra and nice to have, and my view is that until we really buy into that value for any child, and the arts more generally, for their intrinsic value, and also, what they offer to our community, to our society, the creativity that’s developed through taking part - until we actually value that as a society and say that’s crucial, and every child should have the same opportunity, we won’t crack this.”


That sounded so right. It rang true. Instrumental teachers know it’s hard for children (with rare exceptions) to make progress without a lot of support from schools and parents.
But wait. Was that what  this was programme all about?

I think the Chineke! orchestra is great. It’s lovely, if a bit 'political'. Although it’s for black and ethnic minority players, I did spot at least three players who looked distinctly white in the string section.

However, like the “Black Police Association” is there really a valid case for racial positive discrimination in every single area of society? Or is it a gimmick?

I mean, I recognised several players in that orchestra as exChetham's pupils, and there are no race/ethnicity barriers there. It’s all about ability and enthusiasm.  Most of the pupils of elite music conservatoires and specialist music schools are privileged, no matter what ethnicity they’re from, in that they have supportive parents (or a role model in the background).

Sorry. it’s not a matter of race at all. It may be a matter of class, perhaps; I’m not completely sure.

The barriers are non-racially discriminatory. They’re universal. The barriers listed by the speaker, Hilary Boulding of the  Royal Welsh College of Music and Drama, are universal. They apply to everyone equally.
Classical music is undervalued and under promoted. Throughout all ethnicities. Maybe the presenter, Joseph Harker is a bit of an example of positive discrimination himself.
He’s a black man who  thinks we don’t enjoy classical music properly, and we should be encouraged to dance at concerts. He said:

“Neither performer nor audience could ever smile during the music, or move. They just haver to wait till the end of the concert, when they could say something like ‘jolly good show.’ I’d like to see classical music move away from these rules and conformities, and for audiences to really start enjoying themselves, to stand up, to cheer, to clap, to sing, to dance along with the music, so that they enjoy it in the same way that they enjoy popular music concerts.

Think if the tables were turned, and we had something like the Royal Academy of Hip-Hop, and where to be a hip-hop musician you had to study for exams, you had to go to some posh sounding conservatoire, you had to know the music in depth. Imagine how many people that would put off from enjoying the music.”

Yeah right. I’m not going to say what I think of this in case it’s interpreted as racist. Instead I’ll just be snobbish.
We could do away with all that time-consuming study, all that boring practice and that off-putting fusty old ‘in depth study’.  We could make classical music more like hip-hop. Schools could introduce something accessible to all into the curriculum, like A Level ‘Britain’s Got Talent’. Everyone could jump around with joy. 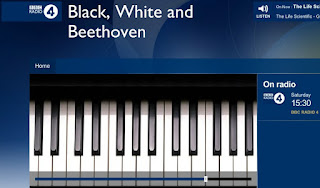 I don’t know whether Joseph Harker realises that classical orchestras, including Chineke!, consist of musicians who have attained that level of expertise only by committing themselves to copious hours of practice and putting in a colossal amount of time and effort. There’s no short cut, no easy option, whatever your creed or colour.  I think that  is more or less what Hilary Boulding was trying to say. The barriers have little or nothing to do with race, and barriers are colour-blind. Barriers to classical music have equal non-opportunities.
Posted by sue at 21:47