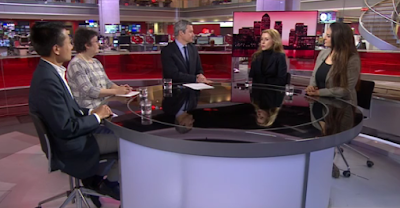 Gavin Esler began this week's Dateline London with an Andrew Neil-like statement, calling the perpetrators of the Brussels atrocity "losers":

Well, within minutes - quite literally - of news of the Brussels atrocity politicians and commentators were alive with blame: It's all the fault of Western policy in the Middle East, or the Belgian authorities, the failing European Union, immigration and migrants who fail to integrate, and so on. We'll touch on some of these points in a moment but can we begin by laying the blame where it belongs: with the band of losers who actually carried out the attack?

He then rather spoiled the effect by immediately employing the BBC's favourite 'alienated and disenfranchised' explanation for such people's terrorist actions:

What lessons can we now learn from the bombings and the reactions to them? I mean, these were...You could almost have written the script beforehand in a way: that they were people on the fringes of society with very little stake in that society, which they obviously hate.