What to do when in Rome?

Did you hear Danny Savage talking about those refugees again on FOOC?
The tale about the ham sandwich?
The poor Syrian lady picked the meat out of her sandwich and handed it to her husband, who brought it over.

“Quite what anyone is thinking, giving out ham sandwiches to a field full of Muslims is beyond me ....Cock-up rather than conspiracy I think .... well-meaning people not quite thinking things through”

So the old adage ‘when in Rome”’ has at last been modified. It’s more PC. Now it goes: ‘when in Rome, the Romans must do what we do.” 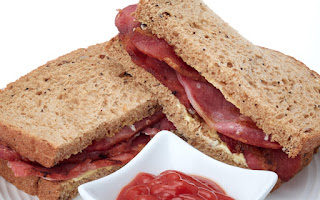 Care home staff stopped residents eating pork pies
Did you read in the Times (and the Telegraph ) about the care home workers in Bradford (where one quarter of the population is Muslim) who wouldn’t let the old folk have their favourite pork products? No bacon sarnies, no pork pies, and definitely no jambon.

“All staff have been reminded that their own lifestyles and cultural preferences should never influence the person-centred support they provide to service users”.

Ah. That must have been what Danny Savage was thinking of, though probably “not quite thinking things through”.  When refugees are being fed and looked after, they’re ‘service users’ and the host country must not let their own lifestyles and cultural preferences influence the person-centred support they provide.

Can we revive the old adage after all? Confusing, innit?
Posted by sue at 15:49