"The second world war ended over 70 years ago, and only those of a certain age still remember its events at first hand in Germany, and that includes those who worked at the extermination camps at Auschwitz and of course the survivors of the Holocaust.
Of the thousands of Germans who worked at the death camps, only some of the senior figures were ever prosecuted. But now there are several trials being held in Germany, of lower ranking officials such as guards accused of being accessories to mass murder. They and their surviving victims are in their 90s, and as Jenny Hill’s been finding, it’s reminding Germany of its dark past. All the while anti-migrant sentiment is growing: 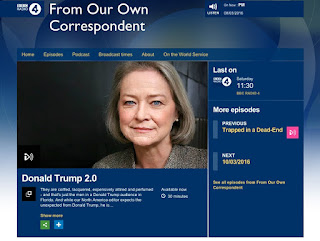 "Angela Orosz is small, energetic and she smiles a lot. I find myself laughing along with her as she tells me that her family never threw away potato peelings, preferring to eat them instead. “Potato peelings!” she exclaimed “Can you imagine?”

Angela was born in Auschwitz. her story is an unimaginable story of human cruelty and human resilience. Her mother was pregnant when she was transported to the death camp. Somehow she survived despite the experiment she was subjected to. Somehow she sustained the pregnancy, eating potato peelings from the camp kitchen, and somehow Angela was born, concealed, and lived the first few months of her life in the camp before its liberation.  Decades later this immaculately dressed dark haired woman sits in front of me. we’re not smiling any more. “Potato peelings”, she repeats, carefully. “They saved my life.”

Angela recently gave evidence at the trials of two SS guards at Auschwitz. A recent court ruling has made it possible for prosecutors to pursue anyone who worked in a death camp, regardless of their role. One man who’s been convicted of aiding and abetting mass murder, several others have been charged, but they’re all now in their nineties, it’s a race against time to bring them to safe justice.

The trials fascinate and horrify Germany. They’re a searingly painful reminder of this country’s past. In the municipal blandness of the courtroom survivors recount surprisingly vivid detail. A young woman with bright red hair, shot by a uniformed Nazi; a father’s hand closing the gate on the family home before he was marched roughly away; a sewing machine, carefully, hopefully, carried into the chaos of the train to Auschwitz. It’s all recounted with quiet insistence as weak sunshine pales the wooden floor and traffic faintly murmurs past outside.

Recently I watched as one of those survivors spoke directly to the former guard in the dock. Leon Schwarzbaum’s eyes are strikingly bright. he has a beautiful smile, but it’s often washed away by an expression of profound sadness. His whole family was killed in Auschwitz. Leon’s eyes were fixed on Reinhold Hanning who was accused of murdering tens of thousands of Jewish prisoners. Crammed together on flimsy plastic chairs, the watching journalists were absolutely still, and I realised I was absolutely holding my breath. “Mr Hanning” he began. “We are about the same age. We will soon face our final judge. I want you to tell the truth about what you did.”

This, I thought really was Germany, confronting its past, face to face.
I chatted recently with a lawyer who represents some of the survivors. “These trials” he told me, “really matter” His face creased, emphatic. “It’s about justice, yes, but it’s also about making sure this country doesn’t forget. It’s already forgetting.”


I wonder whether he’s right, because it seems to me that as Germany confronts the horror of its past again, it’s also facing a stark present reality.

The refugee crisis has revealed a painful glimpse of what the country’s president Joachim Gauck refers to as ‘dark Germany’. It’s there in the faces of screaming anti migrant protesters illuminated harshly in the headlights of a bus carrying refugees to what should have been a safe house. Or the mob, violently silhouetted by flames who clapped and cheered as a refugee home burned to the ground in front of them. And then there are the swastikas crudely splashed by night discovered by day on the walls of buildings, which house asylum seekers. There have been more than a thousand attacks like these on refugee homes in the last year. Most Germans are horrified. Even so, supports has grown for the grassroots political party in Germany which campaigns against migrants. Its leader recently proposed border guards should make use of their firearms. Germany’s constitutional court is currently deciding whether to ban another political party. The far-right NPD. Many here blame them in part for the current anti-migrant sentiment and violence, but in fact proceedings began two years ago when Germany’s 16 states petitioned the court to outlaw the party, which they claim is racist, antisemitic and has similarities to Hitler’s Nazis.


I think back to Angela and her potato peelings. She’d also told me how she’s made her nine-year old daughter navigate the city’s subway system alone so that she could survive by herself if the Holocaust happened again. For all her determination and bravery, the circumstances of Angela’s birth have infused her life with a profound insecurity. It’s a frailty that touches Germany, even now.

That is a transcription of Jenny Hill’s FOOC (preceded by Kate Adie’s intro) I’ve done that so that you can judge for yourself. Jenny Hill (Welcome to Germany) regards all refugees fleeing from poverty or war, or seeking ‘a better life’  as unquestionably entitled to unlimited hospitality from western European countries, no matter who, why or where.

But is the  plight of would-be migrants fleeing from poverty and war really comparable to Germany’s industrialised extermination of the Jews in WW 2? 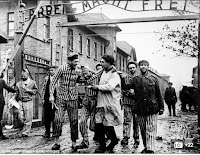 Does Germany’s guilt oblige European countries to absorb, permanently or temporarily, millions of destitute and desperate Muslims, when there are vast prosperous Arab countries that could accommodate them without those troublesome ideological differences?

Did you wonder why Jenny Hill sought to sandwich the refugee crisis in between two slices of Holocaust? Well, she’s by no means the only one who does that, but it seems profoundly crass. She sees superficial similarities, so conflates the two. She alludes to ‘lessons’ that she thinks the Holocaust should have taught us.
Not ‘Don’t tolerate antisemitism’.  The ‘lesson’ she takes from the Holocaust appears to be:  ‘opposing mass Islamic immigration is racist’ and those who do so (the far-right) are no different to the Nazis. 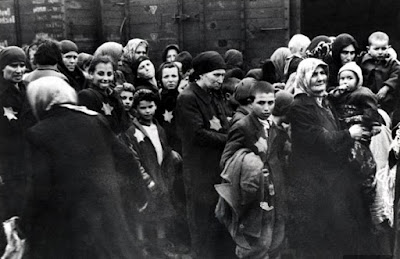 Is  she really equating Muslim refugees with victims of the Holocaust? Is she saying that opposing the influx of Muslim, (very likely antisemitic) refugees is racist? Have the recent  incidences of sexual harassment and violence in German cities, the rapes in Sweden and so on escaped her?

I’d like to know what that lawyer meant by “Germany is already forgetting.” I do wonder if he meant that in the way Jenny Hill was emoting. Or the opposite. Forgetting about the consequences of antisemitism perhaps?  Never mind.


I found Jenny Hill’s use of that ‘potato peelings’ tale cheap, inappropriate and clumsy.
Posted by sue at 18:11