"There go the BBC again!" 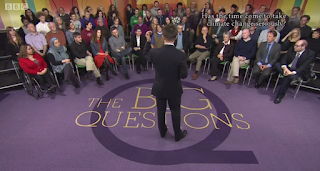 The topic of BBC bias came up during the central portion of today's The Big Questions.

The panel featured many a Sunday morning BBC One regular - from Owen Jones, Jonathan Bartley and the Rev Peter Owen-Jones to Richard D North, but also included one Piers Corbyn - brother of Jeremy and non-believer in man-made global warming.

Piers said that only 7% of scientists believe in man-made global warming and that the globe is in fact cooling. He was duly booed by the audience.

Green Party supporter Jonathan Bartley then criticised the BBC for inviting people like Piers on in the first place. He told Nicky Campbell "You're not helping".

Nicky then made a short speech saying that the BBC has a duly to allow such people on and it's up to people like Jonathan Bartley to explain the public why people like Piers and Rupert Darwall (the other full-blown 'sceptic' on the panel) are wrong.

For JB, such 'balance' is wrong.

He and Nicky then shared a joke about the BBC allowing flat-earthers on. "I wouldn't put it past you", said JB. Nicky laughed.

The odd thing about Jonathan Bartley's protest against 'BBC impartiality' here is that Nicky Campbell had, at all times during this section of the programme, not even made the slightest pretence of being neutral. He was blatantly one-sided.

He repeatedly made the case for believing in global warming and the need for action. He waxed apocalyptic at times. He made several slighting remarks about people who don't believe in global warming. He encouraged one side, and challenged the other. He introduced Piers by comparing him to Donald Trump, Ted Cruz and Marco Rubio (and he didn't mean it as a compliment)...

,,,and, finally, turning back to the lady from Friends of the Earth (after another burst of Piers) said "I think for the sake of sanity, I think we should give....I'm going to give you the last word."

He knew exactly what he was doing with that as he immediately added a 'BBC bias' joke: "There go the BBC again!"