Tramping against Trump - and Brexit

Last night's Newsnight was quite something. They really went after Hillary Clinton.

First John Sweeney did a take-down of Hillary. He chucked everything he could at her: from Whitewater to the Clinton Foundation, rows over the money she gets for speeches, Sidney Blumenthal, Benghazi, her private email server, possible conflicts of interest among her advisors, her State Department emails, etc. Various anti-Hillary hacks and lawyers acted as his 'talking heads'.

Then Emily Maitlis went to speak to Hillary-inclined voters in a small town in Louisiana. Her main 'talking head', however, was another anti-Hillary hack.

Then came a studio discussion of the wider meaning of the Hillary phenomenon with three like-minded commentators: Eurosceptic academic John Laughland, British historian Mark Almond and US political commentator Pat Buchanan. They all slated Hillary. the EU and the establishment, and said positive things about Putin and the Hungarian and Polish governments.

I couldn't believe what I was seeing on the so-called impartial BBC! 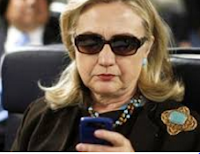 You didn't believe me for a second did you?

I don't blame you. Of course none of the above happened. And was never likely to have have happened on the BBC.

In each case the mirror image actually happened: John Sweeney did a take-down of Donald Trump; Emily Maitlis went to speak to Trump-inclined voters in a small town in West Virginia; the various hacks in the reports were all anti-Trump; and the studio discussion on the wider meaning of the Trump phenomenon involved three like-minded commenters from the opposite side of the argument to Messrs Laughland, Almond and Buchanan: namely, (1) Anne Applebaum, (2) Timothy Garton-Ash and (3) Timothy Snyder. They all slated Trump, European 'national populists' (Front National, Polish and Hungarian governments), Putin, and Brexiters, and said positive things about the EU and traditional Western institutions.

Everyone - from Newsnight's reporters and presenter (Kirsty Wark) through to their 'talking heads' and all of their studio guests - was marching in lockstep last night against Trump - and the closing panel marched in lockstep against Brexit too.

You really don't have to be a conspiracy theorist to wonder about the pro-Brexit bias on last night's Newsnight, do you?

Timothy Garton-Ash and Anne Applebaum are very well known for being strongly pro-EU and you don't invite them onto a studio discussion about the wider meaning of the Trump phenomenon without expecting them to make plenty of pro-EU, anti-Brexit points - as they and Professor Snyder then did. Newsnight must have known what they would get.

Will many Americans see this edition of Newsnight?

If they do maybe it will have the same effect as Newsnight editor Ian Katz's last major intervention in US politics when, as a Guardian editor, he oversaw that letter campaign from Guardian readers to swing-voters in Ohio in the 2004 presidential election urging them to vote for Kerry over Bush - a campaign widely reckoned to have backfired and annoyed enough voters in Ohio to swing the state towards Bush.
Posted by Craig at 09:08