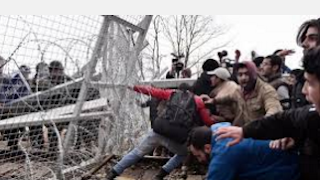 Last night's PM  began with the migrant crisis. After a short clip from an interview with "15 year-old Angie from Aleppo in Syria", hoping to go to go to join her father in Stuttgart, came a full-length interview with Franck Düvell, "an associate professor at the Centre of Migration Policy and Society at Oxford University" - as Shaun Ley introduced him. Shaun asked him if "Angie's example" was typical, and Professor Düvell said it was and kept saying that the women and children on the Greek-Macedonian border were hoping to be reunited with their menfolk in Germany.

As so often with these kinds of academic expert on the BBC, I smelled a certain lack of 'disinterest' on the good professor's part and Googled him. On his Twitter feed he calls himself an "activist on migration, refugees and human rights issues", Well, I rather suspected as much!

Next came an interview with a company director from the British Chambers of Commerce regarding the suspension of BBC boss John Longworth for showing (a mild pro-Brexit) 'bias' over the EU referendum. The company director chosen by PM was strongly supportive of Mr Longworth's suspension,

Of course being PM it wasn't all pro-migration academics and critics of John Longworth. There was also a feature on renaming Slough and the 80th anniversary of the Spitfire,

A young Muslim lad wants Slough to change its name, perhaps to Upton, He thinks a name-change will improve its reputation as the kind of place poets would like friendly bombs to fall on, and Ricky Gervais-types select to mock in their sitcoms - and which inspired John Bunyan's Slough of Despond in The Pilgrim's Progress (or maybe not). A Conservative councillor thinks that does Slough a huge disservice. Slough has a great future as Slough he reckons. And the debate goes on.

I've always wondered whether Morecambe should change it's name - particularly as few people can spell it. My suggestion is 'Morecame', as that might subliminally suggest to people that more people come to Morecambe than to, shall we say, Blackpool. I hear the council will be debating that next Thursday....whilst on their latest fact-finding mission to Tenerife.

The bit on the Spitfire was also enjoyable. It consisted of an interview with the pilot who re-enacted the plane's maiden flight. I learned from him that the wonderful sound of the plane isn't quite so wonderful inside the cockpit. Anyhow, it inspired me to click into YouTube and dig out my favourite William Walton piece - the Spitfire Prelude and Fugue: