That spot on Wednesday's programme - the morning after the terrorist atrocities in Brussels - began with Matthew Price in Brussels.

(As per Sue), Douglas Murray predicted, immediately after the terrorist attacks, that, after the initial shock, next would come "the sentimentalists await(ing) the arrival of this atrocity’s cutesy hashtag or motif and hope it will tide them over until the piano man arrives at the scene of the attack to sing ‘Imagine there’s no countries’".

His specific prediction was for social media, yet BBC Radio 4's Today leaped straight into doing that very thing too. Matthew Price focused throughout the programme - as well as at the start of the 8.10 spot - on just that:  the candles, the flowers, the chalked messages, the banners proclaiming 'unity against hatred'....

6.08 And in the centre of Brussels where I am at the Place de la Bourse there are still candles burning...

6.08 Some of the images that you see both here in the centre of Brussels, with those candles...

6.09 Le Soir carries a photograph of people gathered where I am at the moment in the Place de la Bourse writing message of solidarity in chalk on the pavement. That's something we'll turn to later on in the programme as well.

6.14 It is light here. It's drizzling as well, but the drizzle isn't putting out the candles.

6.35 Here in the centre of Brussels there are a handful of people who are gathered contemplating the scene outside the city's Bourse where candles have been lit and people have written messages of commemoration in chalk on the paving stones.

7.09 I'm outside the magnificent Bourse on the steps of which people stood yesterday evening and where they started a very simple act of commemoration - not just lighting the candles which are still burning here this morning, despite a little drizzle; they started writing in chalk on the paving stones message of unity, messages of support for one another and support for those caught up in the murderous attacks.

7.35 There's a scene of reflection in the centre of Brussels this morning. Candles have been lit and thoughts written in coloured chalk on the pavement. One here in vibrant blue says "Love is our resistance".

8.10 It is rather a sorry sight here, just across from me in central Brussels this morning. There's a light drizzle falling on the flowers and the candles....and that drizzle is starting to fade the vibrant colours of the words chalked into the paving stones. Most of those words are messages of hope: "We are united", "Brussels, my beautiful city". and the like, but one that stood out to me - also scratched on the pavement in chalk: "J'ai peur" - "I'm afraid".

8.12 Just walking through to part of the pavement where a couple of Belgian flags - the red, yellow and black - have been lain out and, on top of them, candles have been lit, people putting down bunches of flowers...

8.13 And now that you're here, how do you feel? All these messages being written onto the pavement in chalk?

8.59 Well, there are more people gathering here in central Brussels. We're just off the Grand Place, the magnificent medieval square in Brussels, and outside the Bourse. And someone has hung a banner up on it this morning saying 'Unis contre la haine.' More people are stopping on their way to work, contemplating the candles and flowers left on the paving stones in the drizzle here.

....and his longest interview with a member of the Belgian public during the 8.10 spot was with a woman who repeated "All we need is love...All we need is love" and said "We are angry, but we have no one to be angry at".

That last message led onto the next one, as next came an interview with a headscarf-wearing Muslim woman called Asmah.

She knew one of the Paris terrorists and recalled him as being "normal" and "kind". He'd got involved in "small criminal acts", she said, and the jails in Brussels had let him down. More generally, she put the problem of "radicalisation" down to "a problem of identity" in Europe, with such "young people" being made "schizophrenic" by the authorities who oblige them to keep their religious beliefs to themselves. Much as she likes Belgium for being multicultural, she blamed the country for "forgetting its history" and said it wants them [Muslims] to stay in the "shadows of society".

Among Matthew Price's contributions here were:

Why are some people getting left behind? What is it about this society perhaps that fuels some radicalism?

He next talked to Major Serge Stroobants, a "Belgian security and defence expert and representative for the Institute for Economics and Peace". Major Stroobants, who agreed with Asmah about the causes of "radicalism", pretty much ticked off every box here. He really did blame alienation, Western foreign policy and Israel.

(Here Today went straight to another of Douglas Murray's predictions: "Meanwhile other people will change the subject over to the question of Belgium’s unacceptably interventionist foreign policy. Others will get onto Israel-Palestine". And indeed they did).

It's a lot of young people [said Major Stroobants], young men but also young girls, that do not feel a sense of acceptance within our society, that do not feel they fit in the society, and that just creates a sense of frustration. This creates a feeling of emptiness inside them that the recruiters and the radicalisers are really happy to fill. But this is not only the problem of our society, it's also a problem of the situation all over the world. I mean, interventions in some types of conflicts, the situation in the Middle East, the conflict between Israel and Palestine, are also fuels for radicalisation,

Then Sarah Montague took over, talking to Deputy Assistant Commissioner Neil Basu from the UK Counter Terrorism Policing Network. She was soon asking him about Donald Trump (who he obligingly condemned) and the risk of a backlash against British Muslims. ("Are you nervous, given what's already been said since the attacks in Brussels, of a spike in hate crimes?", she asked)

This interview made a couple of Douglas Murray's other predictions pretty much come true;

(1) Meantime someone will hopefully have said something which a lot of people can condemn as ‘inappropriate’.  [Here Donald Trump].

(2) At around the same time the Corbynite-wing of the Labour party will get onto their favourite subject which is not dead bodies in airports but people who have been looked at meanly on a bus while wearing a headscarf.  By at least tomorrow the story of a savage ‘backlash’ (consisting mainly of stares and horrible things written on social media) will be being talked-up by all mainstream Muslim leaders.  By Thursday no one will be talking about the victims. [Here Sarah Montague and a p.c. PC rather than the Corbynistas]. 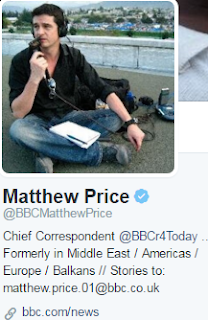 Matthew Price is another of those BBC reporters who uses his Twitter feed (@BBCMatthewPrice) as part of his reporting. After the initial shock, much of his Twitter reporting from Brussels has also focused on images of chalked messages - especially chalked hearts - on pavements. He did, however, also link to an extended article about "the links between the Middle East's wars and terrorism in Europe" from a Canadian journalist which makes many of the familiar points about how Western foreign policy (recent and not-so-recent, from Sykes-Picot to the recent invasions to our support for Israel) is largely to blame for the anger and alienation of young Muslims in Europe and the rest of the world, He then moved on to tweeting (negative stuff) about Israel.

More on these themes can be found here:

Kathy Gyngell: According to the BBC, Brussels outrage is all our fault
Raheem Kassam: Enough With The Teddy Bears And Tears: It’s Time To Take Our Civilization Back
Posted by Craig at 11:17