A friend to all of us 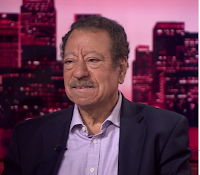 Aw, that was sweet of Jane Hill on today's Dateline London to introduce the programme's most regular commentator, the Palestinian journalist Abdel Bari Atwan, as a "friend to all of us"!

All of the good folk at Dateline maybe, but certainly not much a friend to Israelis.

After all, according to Wikipedia (and many, many other outlets), he's the man who said that he would "go to Trafalgar Square and dance with delight" if Iran attacked Israel and that, if a war broke out, and Iran would attack its Arab neighbours and American Gulf bases, "Allah willing, it will attack Israel, as well." He has also "justified" Palestinian attacks on Israelis, including one that killed Israeli students, one as young as 15. He's also told non-Western media outlets that "jihad must be directed, first and foremost, against the Israeli enemy. All our guns must be turned toward that enemy, regardless of our differences, because this is the only thing that unites us", adding that "Arabs who do not think that Israel is an enemy are neither Arabs nor Muslims."

None of which sounds very friendly to me.

And yet to to the makers of Dateline, whose views Jane Hill was doubtless reflecting there, he's "a friend to all of us".