It's a while since I've listened to Saturday PM on Radio 4.

Saturday is Eddie's day off so it's always someone else. Today some unkind soul on Twitter wondered if they'd got a trainee in to do the presenting but, no, it was Sima Kotecha.

We had the leader of the Labour group in Kensington railing against the Conservatives and backing Mayor Khan's calls for the government to replace the elected politicians there with commissioners. We also had that nice Alastair Campbell (former Labour spin doctor) talking about the cricket (spin bowlers).

It wasn't all Labour (and the BA cabin crew strike) though. There was also Barry Cryer reminiscing about his friend Barry Norman, whose Film WhateverYear was something I used to watch regularly in my younger years despite rarely ever watching films. Barry Cryer seems to do all the tributes for every passing celebrity. What would passing celebrities do without him? (Let's hope that problem doesn't arrive for many a long year!). I suspect we'll be seeing quite a few BBC types tweeting about this Daily Mail faux pas very soon: 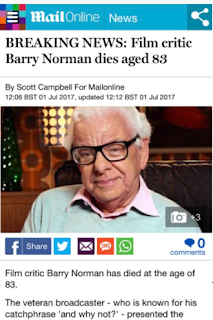 And, naturally for Radio 4, we also had a heart-warming report from the Netherlands about how well refugees are settling in there thanks to a particular programme, and how economically beneficial refugees can be to a host country. Classic BBC stuff.

(No mention of 'economic migrants', only 'refugees' of course - despite it being the Dutch EU commissioner Frans Timmermans who said last year that the majority of so-called refugees into the EU are actually economic migrants.)
Posted by Craig at 17:57