This is supposedly part of a transcript of a New York Times interview between President Trump and Maggie Haberman, and it's apparently 'gone viral' on Twitter: 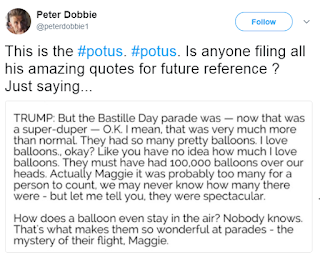 I spotted it because Rob Burley, editor of The Andrew Marr Show, tweeted about it, advising us to consider it as a Trump quote worth reading - and the balloon stuff certainly sounded like something worth 'filing for future reference': A US president asking, "How does a balloon even stay in the air? Nobody knows". The snag is that it's fake.

Rob has now deleted his tweet, given that he must have done exactly what I did and started Googling around only to find it wasn't true. For, yes, Donald Trump did not start talking about balloons at the Bastille Day parade (though he did call the parade 'super-duper'). It's a fake transcript. (The real transcript is here).

And according to Patheos: 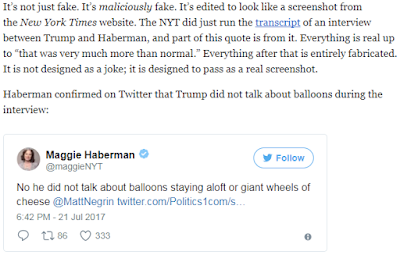 Other BBC types weren't as sharp-eyed as Rob, however. BBC business reporter Joe Lynam rushed straight in there (where angels fear to tread):