Some scoops are more equal than others 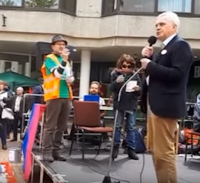 This morning's Andrew Marr interview with John McDonnell was fascinating on so many fronts, not least of which was Mr McDonnell's 'rowing back' (as the Independent puts it) on Labour's election pledge/promise to wipe out student debt - a pledge that went down extremely well with students (as this HuffPost article demonstrates).

That 'row back' was so starkly at odds with the promises made by the likes of Mr McDonnell himself during the election, when he pledged to the public that Labour would bring in a free, cradle-to-grave "National Education Service", that, understandably, right-wingers have taken to the media and social media today to demand that this interview be broadcast far-and-wide - and especially towards the young - in order to prove Labour's duplicity.

And it was a scoop for The Andrew Marr Show.

And yet, despite widespread coverage (from the Independent to the Daily Mail, the Telegraph to the Times) and despite even the Guardian making something of this story soon after the Andrew Marr Show interview was first broadcast, the BBC itself held off from making anything of its own 'scoop' for hours after, preferring instead to focus on Philip Hammond's public sector pay comments, making that its lead story.

Finally a BBC website article arrived (some four or five hours after the Guardian) - an article I missed, despite dipping fairly regularly into the BBC News home page. I only found it after Googling 'McDonnell student debt' and then filtering on 'News'. Goodness knows where it appeared first. It's not on the home page even now. It's a low-ranked, small print story on the UK page but, weirdly, is nowhere whatsoever on the Politics page. Its headline Labour: Paying student debt 'an ambition' is a dull take too (uncannily similar to the Guardian's McDonnell: wiping out student loans is 'an ambition' for Labour. No talk of 'rowing back' or 'U turns' from the BBC.

As I say, it's interesting what captures the BBC's imagination, news-wise, and what doesn't. Corbynistas should be reassured that the BBC doesn't appear to have been acting as 'Tory propagandists' here after all. (Far from it in fact!)
Posted by Craig at 21:21