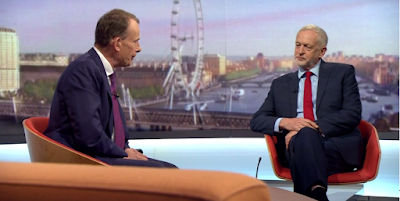 Last Sunday, ITBB carried out a short analysis of the Brexit-related questions/comments put by Andrew Marr during all of his one-to-one political interviews over the previosu three editions and found, though if wasn't entirely black-and-white, there was a clear and significant anti-Brexit bias taken overall. It's only right-and-proper then to round that off by subjecting these weeks questions to exactly the same scrutiny.

So, do these show a pro-Brexit or an anti-Brexit bias, or no bias either way?

As before, I'll add my own verdicts in italics after each list and ask again, "Do you agree with them?"

Questions to Liam Fox:
The questioning here (to a pro-Brexit interviewee) was broadly pro-Brexit. Last week I noted that of the 57 questions/comments put across 7 interviews not one put a positive point about Brexit. The opening questions here did do that, and the sixth question raised concerns that many pro-Brexit people might share. So this provides counter-evidence to the findings of my survey last week.

I really can't say that there was any anti-Brexit or pro-Brexit bias on display here. The questions were trying to clarify where Mr Corbyn stood on certain key points.

Andrew Marr didn't ask all of his questions from just one perspective and there is evidence here of some impartial, 'devil's advocate' questioning. But they were fairly rare moments, and...

This week, the evidence points the other way, thus balancing things out somewhat.

It would be good to think that more care was being paid because of last week's study here.

As ever, please feel free to disagree.
Posted by Craig at 13:05