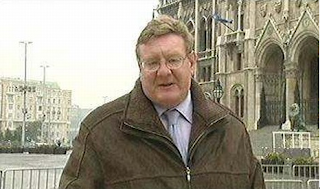 As regular readers will know, however variable the levels of bias might be on some BBC programmes, there's one programme that can pretty much always be relied upon to be biased, particularly on the issue of Brexit: Mark Mardell's The World This Weekend.

I can't think of a BBC programme that's even comes close to being as relentlessly biased in one direction over such a long period (except for Today, the World Tonight, Newsnight and PM, etc).

It's pretty much guaranteed that whenever Brexit is a featured topic, TWTW will find a negative angle about it and proceed to steamroller that angle over its listeners' ears for much of the programme.

Several previous posts have begun with variations on the following theme:

It's like a cookie-cutter template (for them and for me!).

So how did Mark Mardell open the show today? With these (entirely characteristic) words:

Welcome to The World this Weekend. This is Mark Mardell. The head of the powerful association representing German carmakers is worried about the way Brexit is going, and he's hardly alone:

Voice 1: What would help us would be decisions and fast decisions.


Voice 2: Policymakers in Berlin are surprised and worried about the extent of confusion and the somewhat incoherent messages that come out of London.


Voice 4: We are actually preparing for tariffs. It would worsen our business.

Voice 5: I miss the traditional British pragmatism and I see more and more ideological points of view which make pragmatism very difficult.

We've been to Stuttgart and Berlin to hear the views of German industry, and we'll talk to former Conservative cabinet minister Owen Paterson.

Yes, it was déjà vu all over again.

It really is always like that with TWTW when it comes to this issue (except for those occasions where there are only anti-Brexit voices).

Belated interjection (by Sue)
Craig gave me permission to say this. I didn’t hear the programme, but I think we could be shooting the messenger this time.

The vox pops Mark Mardell selected do faithfully echo the opinions I heard during my own foreign jaunt; unfortunately we’d probably rather not hear these views.

I spoke to British passport-holders resident in Germany who were very worried. They were uncertain about their future status, their entitlement to healthcare and social care should they need it in old age.

Their policymakers were telling them that messages coming out of London were ‘somewhat incoherent’. I don’t think their media covers Britain’s case for Brexit the way ours presents the case against, if at all.

That’s what I meant when I said in my earlier post: “their ideological (pro EU) position trumps all concerns and worries over trade issues. In other words, even if they do ‘need us more than we need them’ trade-wise, they’ll happily suck it up for the sake of the Union. They say unity within the EU reigns supreme, even more so now with Macron onside.”

What Mark Mardell did was to give us a realistic impression of public opinion from the other side of the channel.
You may argue that he should have made more of the solitary pro-Brexit voice you say he featured, but we do get to hear pro-Brexit arguments from our own pro-Brexit British MPs, if not on TWTW from Mark Mardell. We do see Liam Fox and David Davis on our screens and there are plenty of pro-Brexit voices to be seen, heard and read in the British media.

Because of this, the BBC might argue that balance is achieved ‘over time’. If that’s their case, it could have been made clearer, but we can’t expect every single thing to be counterbalanced by an opposing view each and every time it is uttered.

I felt the British pro-Brexit arguments (their ‘other side of the coin’ ) were lacking in Germany, or absent altogether. The impression I had was that they thought all the intransigence was on our part.

Another thing that took me by surprise was the vehemence with which they protested that the EU had offered David Cameron an exceptionally reasonable deal, and they couldn’t understand why we rejected it.

Maybe the BBC is being clumsy with its presentation, but I think we need to take a step back and accept that reporting the German POV is not necessarily anti- Brexit propaganda.