This is what happens when you very gently disagree with John Simpson on Twitter about whether the BBC is impartial or not: 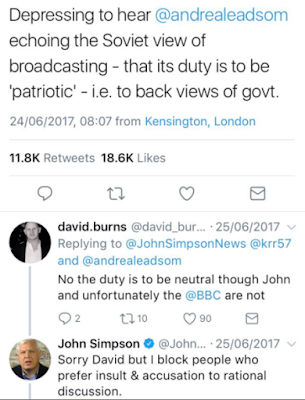 "No the duty to be neutral though John and unfortunately the BBC are not" really was all David Burns had tweeted in reply to John Simpson yet the BBC's World Affairs editor construed that as "insult & accusation" and 'blocked' the poor man - rather in the manner of an over-sensitive apparatchik in the old Soviet Union one might say!
Posted by Craig at 19:34