“The al-Aqsa compound, known to Jews as the Temple Mount” is how Tom Bateman introduces his report about Israel removing those ever so incendiary metal detectors from Islam’s third holiest site. Well, that’s one way of looking a it.

For once a topic involving an Islam-related controversy wasn’t assigned to Mishal Husain on the Today Programme. Nick Robinson (£250,000-£299,999) struggled. Re-naming (and imaginatively relocating) the infamous trouble-spot: “Alaska Mosque”, and  if I’m not mistaken generously allocating well-known Palestinian peacemaker Manuel Hassassian one extra “ass”, he handled the topic bravely.

The news that Israel is removing the metal detectors from al-Aqsa was unexpected. Looking through the online press reports and skimming various below the line comments one finds a predictably mixed response.

What is journalism like?
Some of the stuff I read this morning is barely comprehensible. In most reports the stabbing incident in the Israeli Embassy in Jordan and the subsequent release of the Israeli security guard (from where? By whom?)  was so poorly explained that no-one could have properly understood who did what and why. The leftie press evidently sympathised with the perpetrator, almost absolving him of responsibility by calling him a teenager or 'teen'.

The Guardian has this:

“The announcement came shortly after the evacuation of all Israeli diplomats from the embassy in the Jordanian capital, Amman, following an incident in which an Israeli security guard shot two Jordanians including a teenager who had allegedly stabbed him with a screwdriver.”

Leftie newspaper Haaretz (Israel’s very own Guardian) has this:

However, in my opinion the most cogent report was in the Washington Post. It was the only one that made sense throughout.  With far more clarity, their account of the incident calls the perpetrator a Jordanian workman, which is surely more objective and less emotive:

“On Sunday, a Jordanian workman of Palestinian descent used a screwdriver to stab and wound an Israeli security guard at the Israeli Embassy compound in Amman. The guard shot and killed the assailant and killed another Jordanian, reportedly an innocent bystander.” 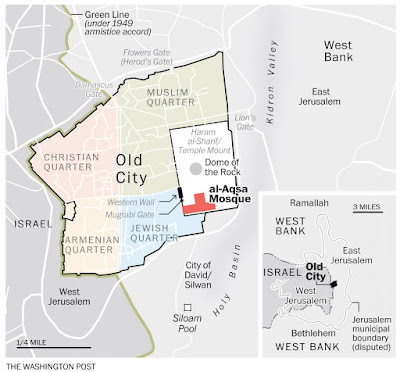 The way the “al-Aqsa incident” is being explained varies greatly. The BBC’s version is so dumbed down I won’t even bother to address it. I’ll leave it to primary schools, who might like to use it for year 6 comprehension. (Do schools still do ‘comprehension'?)

Several reports amplify the so-called ‘threat to al-Aqsa’,  so-called because the Muslims believe the Jews are about to destroy their holy site and replace it with something Jewey.

There’s no smoke without fire as the saying goes, and there are indeed some religious Jews  campaigning for the right to pray there. Why this is seen as the end of the world is inexplicable to most rational people, but rationality doesn’t come into it. The status quo, whereby Jews can visit but must not pray, is being upheld by the present Israeli government and will be for the foreseeable future.
The threat to al-Aqsa is imaginary and a whopping great pretext for rage.

The incident that provoked the metal detector fiasco was also reported in ways that suited the appropriate agenda.

The Washington Post sets it out briefly and simply thus:

“Netanyahu and his supporters said the metal scanners were needed after three Arab Israeli gunmen smuggled homemade machine guns into the al-Aqsa Mosque compound on July 14, then shot and killed two Israeli policemen at the site, which both Muslims and Jews regard as holy.”

If you’ve been following the story you’ll also be aware that the two murdered policeman were not ‘Juze' but Druze, and they were actually on guard duty to protect the worshippers at al-Aqsa. You couldn’t make it up, as they say on the interweb.

The diplomacy behind the decision to remove the metal detectors is set out by the media in various ways too, but again the Washington Post article is the easiest to understand.

Commenters regard Israel’s decision as capitulation and a sign of weakness or pragmatic and wise, depending on their political stance. One thing comes up a lot, which is the fact that metal detectors are currently part of everyday life all over the world. In these dangerous times the necessity for security measures that inconvenience us all are in no small part due to the ubiquity of Islamic terrorism. (could you make that up?)

In its latest bulletins the BBC has reversed the naming of Jerusalem’s infamous flashpoint. In a later report it’s now being called “Temple Mount, known to Muslims as  al-Haram ash-Sharif.”
(The news is currently moving down the charts.)

Obviously, when the metal detectors are disposed of the Israelis intend to install more subtle, even more dastardly security apparatus, which will do nothing at all to alleviate the Palestinians’ primary grievance, the Judaisation of the al-Aqsa Mosque compound.

There will be trouble ahead.
Posted by sue at 10:22